Four years ago, Mohd Ikhlaq, 52, was killed by a mob of villagers in Uttar Pradesh's Dadri on suspicion of cow slaughter. 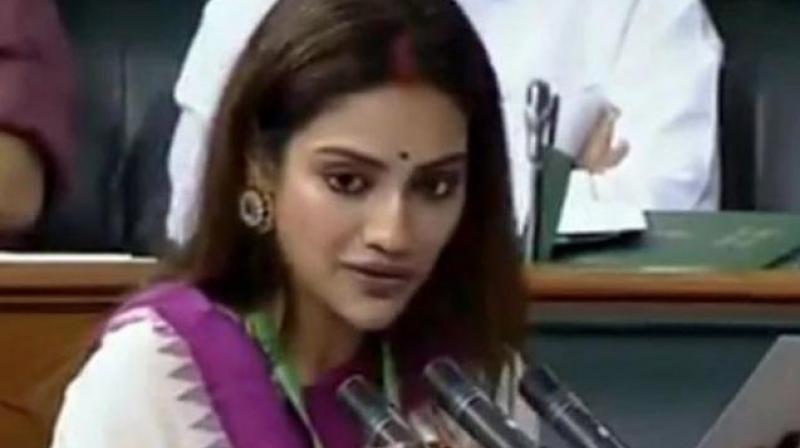 She ended the letter with a line from poet Muhammad Iqbal's Sare Jahan Se Accha -- Majhab nahi sikhata, Aapas mein bair rakhna," (Religion does not teach us to bear ill-will among ourselves). (Photo: ANI)

New Delhi: TMC MP Nusrat Jahan has written an open letter hailing the 49 eminent personalities who wrote to Prime Minister Narendra Modi about alleged rise in hate crimes in the country over the past few years, and said minority communities were facing "horrendous acts of mobocracy".

"Hate crimes and mob lynchings are on a steep rise in our country. The 2014-2019 (period) has the most hate crimes against Muslims, Dalits and minorities to its credit. 2019 has witnessed more than 11 hate crimes and 4 deaths, and they are all minorities and the suppressed," the letter said.

The legislator from West Bengal claimed that there were several incidents where people across the country had been attacked by "cow vigilantes" over rumours of eating beef and smuggling cattle. "The government's selective silence and inaction in this regard has hit us hard...injustice in our country has various names, including Tabrez Ansari, Mohd Ikhlaq and Pehlu Khan," she said, referring to the victims of lynching incidents.

Four years ago, Mohd Ikhlaq, 52, was killed by a mob of villagers in Uttar Pradesh's Dadri on suspicion of cow slaughter.

Pehlu Khan, 55, was brutally beaten up by cow vigilantes while he was transporting cattle along the Delhi-Alwar highway on April 1, 2017. Twenty-four-year-old Tabrez Ansari was killed earlier this year in Jharkhand by a mob that kept asking him to chant "Jai Shri Ram".

Jahan, who was elected from West Bengal's Basirhat constituency in the recent Lok Sabha polls, also raised concern over the slogain "Jai Shri Ram". "Lynch mobs have actually turned the Lord's name into a murder cry. Mob lynching criminals are nothing but enemies of our country," she said, urging the centre to frame a law aimed at curbing such "assaults on democracy".

She ended the letter with a line from poet Muhammad Iqbal's Sare Jahan Se Accha -- Majhab nahi sikhata, Aapas mein bair rakhna," (Religion does not teach us to bear ill-will among ourselves). In their July 23 letter, eminent personalities, including filmmaker Aparna Sen, historian Ramachandra Guha and noted director Mani Ratnam, had demanded concrete action from the Centre against those indulging in mob killings.