‘The Bill which has been tabled is another way to jail Muslims,’ Congress MP from Kishanganj, Mohammad Jawed said. 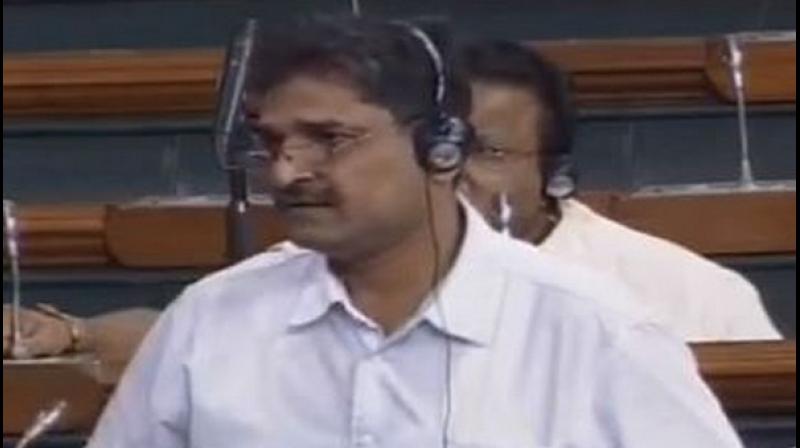 He said that the Bill is in ‘violation of Article 14 of the Constitution as it discriminates between Muslim women and women of other religion.’ (Photo: ANI)

New Delhi: Congress MP from Kishanganj, Mohammad Jawed on Thursday opposed the Triple Talaq Bill in Lok Sabha and said that the government should bring "laws for separated women of all communities" and not just Muslims.

"The Bill which has been tabled is another way to jail Muslims... I oppose this Bill and request the minister to send this Bill to the standing committee for review and make laws for separated women of all communities, not just Muslims," Jawed said in Lok Sabha.

He said that the Bill is in "violation of Article 14 of the Constitution as it discriminates between Muslim women and women of other religion."

"Section 498 (A) of the Indian Penal Code; Domestic Violence Act and Dowry Prohibition Act already applied to Muslims too. Therefore, there is no need for having an additional law to protect only Muslim women," he said.

"There are several contradictions to this Bill. In Section 3 of the Bill, it says Talaq-ul-bidat is void, but in Section 5 and 6 it discusses post divorce issues such as maintenance allowance for the women, custody of her minor children as if the marriage is resolved. The Ordinance also provides for maintenance for the wife, however, if the husband is in jail, how will he be able to provide sustenance allowance above the maintenance (allowance) he has to provide under the law applicable," Jawed said.

He added, "The Supreme Court in the Triple Talaq judgement nowhere said that Triple Talaq should be a criminally punishable offence... This Bill is laid with a political intention to harass the Muslim community and to portray Islam in bad light.. This Bill will cause distress to the familial ties and matrimonial relationships... As per the report in 2006, the separation cases in Muslim women was 4.8 per thousand compared to 5.5 per thousand in Hindu women. Are they not concerned about our Hindu sisters? Shouldn't they think about them?" the Kishanganj MP said.

Jawed said that if the present NDA government is "serious and sincere towards the welfare of Muslim empowerment, then they should think about their jobs, education, how will they get seats on the basis of the population in the Parliament and Assemblies."

"They should have quota for Muslim women in Parliament and (state) Assemblies just like they have a SC-ST quota...," he said.

He went on to give the examples of various lynching cases including that of Tabrez Ansari, Mohammed Akhlaq and Junaid.

"The environment being created today is anti-Muslim. It is not just anti-Muslim, it is against Dalit, minorities, tribals. New laws are being made," he said.

The Muslim Women (Protection of Rights on Marriage) Bill, 2019, seeks to replace an ordinance by the government in February and to make instant Triple Talaq a penal offence.

Last year, the Muslim Women (Protection of Rights on Marriage) Bill, 2018, was passed in the Lok Sabha but it lapsed after the dissolution of previous Lok Sabha with the bill pending in the Rajya Sabha.