'Nothing in our hands': Irrigation Minister as K'taka farmers' strike enters day 5

Farmers in Mandya have been demanding diversion of Cauvery and Hemavati waters to their canals in order to save their produce. 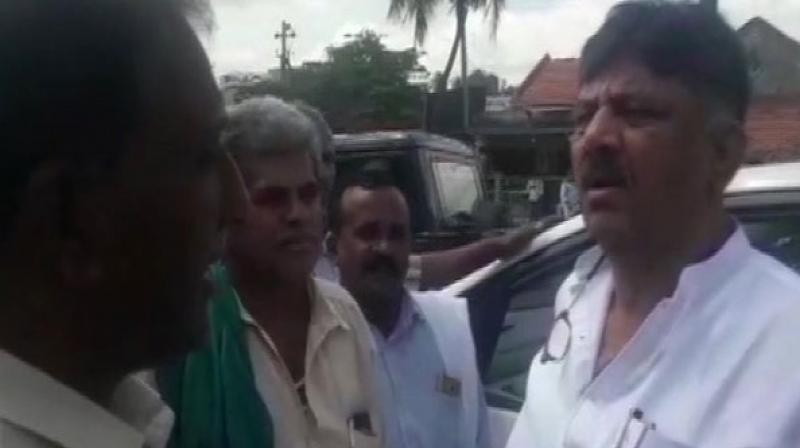 Water Resources Minister D K Shivakumar was forcefully stopped by the agitated farmers to lay down their demands before him. (Photo: ANI)

Mandya: The indefinite strike by the Karnataka Rajya Raitha Sangha (KRRS) members demanding Cauvery and Hemavati waters to be channelised for saving standing crops entered the fifth day on Tuesday.

Farmers in Mandya have been demanding diversion of Cauvery and Hemavati waters to their canals in order to save their produce.

Water resources minister DK Shivakumar was forcefully stopped by the agitated farmers to lay down their demands before him.

After listening to the farmers, the minister responded saying, "Nothing is in our hand. Management is handling water issue and I will speak to them."

On Monday, Chief Minister HD Kumaraswamy had asked the Centre to direct the Cauvery Water Management Authority (CWMA) to resolve the issue, as water crisis deepened in the state.

"Now the Central government has already constituted Cauvery Water Management Authority which had asked Karnataka government to release 9 TMC of water to Tamil Nadu," Kumaraswamy had told ANI, adding, "There is a shortage of water in Karnataka. The central government has to take the decision. They have to direct authority. It is not in my hands."

Tamil Nadu, which is also reeling under water crisis, had demanded last week that 9.19 thousand million cubic feet (TMC) of water should be released immediately in accordance with the recent decision of the CWMA.

Participating in a meeting of the committee, chaired by its head Naveen Kumar, officials from Tamil Nadu had said the CWMA had on May 21 recommended the immediate release of 9.19 tmc of water.