Gambhir said he was thankful to BJP and the party workers who toiled hard to ensure his win. 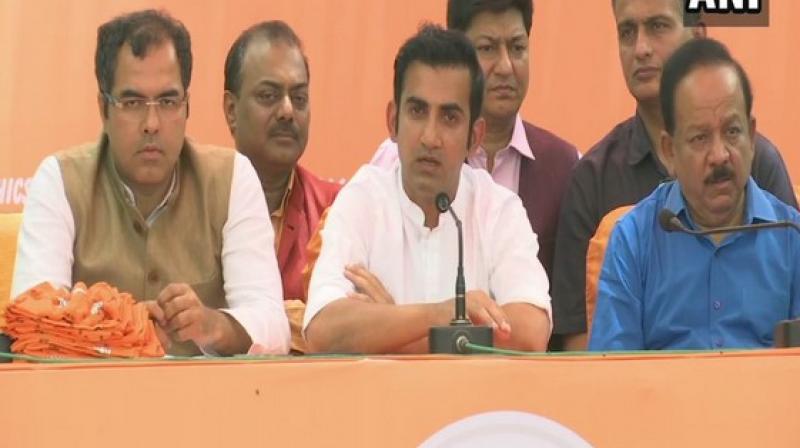 Gambhir asserted that he would not make any false promises to the people of Delhi and will focus on making the city the "best version of itself" in the years to come. (Photo: ANI twitter)

"The Chief Minister should know that elections will come and go. The day you lose your conscience and integrity is the day when you lose everything. If you can falsely accuse someone of such heinous charges just to win one seat then I have nothing to say to you," Gambhir said at a press conference here.

Gambhir was referring to AAP's East Delhi candidate Atishi and Delhi CM Kejriwal's accusations against him of circulating pamphlets with derogatory and casteist remarks against her during the campaigning phase of the Lok Sabha elections.

Gambhir had denied all charges and said he was ready to quit politics if the charges against him were found out to be true.

He was joined by five other BJP MPs from Delhi, Manoj Tiwari, Parvesh Verma, Hans Raj Hans, Ramesh Bidhuri and Harsh Vardhan at the press conference.

Gambhir said he was thankful to BJP and the party workers who toiled hard to ensure his win and thanked the voters for bestowing their faith on him and added the campaigning had been fun but the real work would begin now.

"I came to politics to serve the people of Delhi and India. I thank my party for giving me the opportunity and thank the people of East Delhi for showing their faith in me. The elections are now over but the real work begins now and it will continue for the years to come, where we will have to prove ourselves," he said.

Gambhir asserted that he would not make any false promises to the people of Delhi and will focus on making the city the "best version of itself" in the years to come.

"I will not make false promises of making Delhi like Paris and London. I will ensure Delhi becomes the best version of itself where women are safe. Ensuring clean water and cleaner air will be my priorities," he said.

Gambhir secured his victory from the East Delhi seat with approximately 7 lakh votes. Congress' Arvinder Singh Lovely came second with a little over 3 lakh votes while AAP's Atishi could only manage 2.2 lakh votes.