The chief minister also hit out at Congress president Rahul Gandhi after the AAP and the grand old party failed to form an alliance. 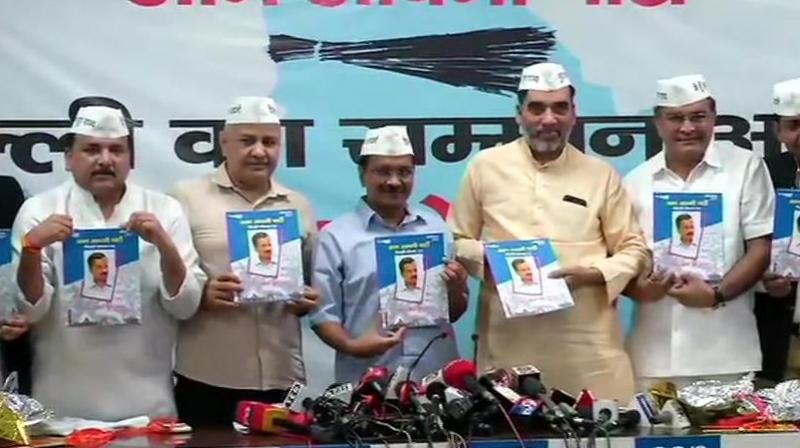 Kejriwal said the AAP's focus would be on getting full statehood for Delhi. (Photo: ANI twitter)

New Delhi: Delhi Chief Minister and Aam Aadmi Party convenor Arvind Kejriwal on Thursday said his party would do everything to stop the Modi-Shah duo from coming to power and support any "secular mahagathbandhan" after the general election.

Addressing the media after releasing the party manifesto here, Kejriwal said the AAP's focus would be on getting full statehood for Delhi. "We will fight our battle on the issue of getting full statehood for Delhi," he said. Kejriwal targeted Bharatiya Janata Party president Amit Shah over his remarks to remove "infiltrators" except Hindus, Sikhs and Buddhists. "This proves that the BJP plans to remove all other religions except these three religions," he said.

The chief minister also hit out at Congress president Rahul Gandhi after the AAP and the grand old party failed to form an alliance. "Want to ask Rahul Gandhi which alliance is formed on Twitter? If Modi, Shah return to power, only Gandhi will be responsible," Kejriwal said.

He alleged that the country's unity was being challenged by the BJP and asserted that the general election could help save the nation. "We will do everything to stop the Shah-Modi duo. We will support any grand alliance government. The 2019 election is to save nation, save Constitution. We are Indians first, then Hindu or Muslim," Kejriwal said. "Our unity is being challenged. The country can be saved only if we don't get divided across religion and caste lines, he added.