India   Politics  25 Apr 2019  'Days of lantern are over in Bihar,' says Modi in veiled dig at Lalu
India, Politics

'Days of lantern are over in Bihar,' says Modi in veiled dig at Lalu 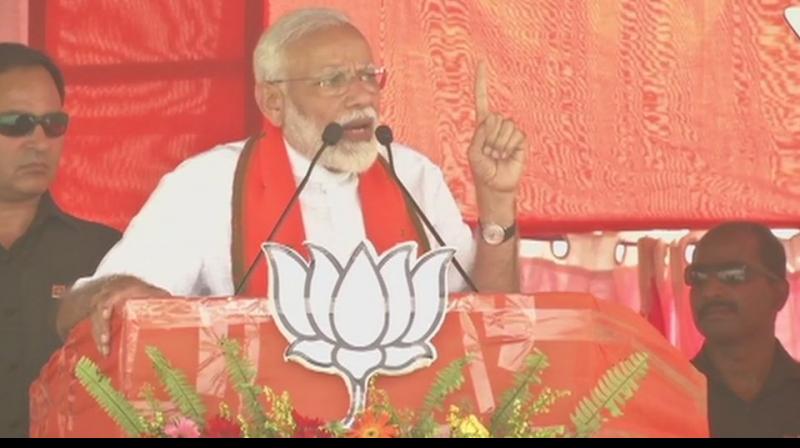 'His wife Rabri Devi, daughter Misa Bharti and son Tejashwi Yadav are among those named as co-accused in the case and a number of their alleged benami properties in Patna,' Modi said. (Photo: ANI)

Darbhanga: Prime Minister Narendra Modi on Thursday launched a veiled attack on the opposition RJD in Bihar remarking that with electricity having reached all corners of the state, the days of lantern poll symbol of Lalu Prasads party were over.

At an election rally here, the prime minister congratulated Chief Minister Nitish Kumar and his deputy Sushil Kumar Modi for making the same possible and also claimed that electricity situation has seen a remarkable improvement in Jammu and Kashmir after it came under Governors rule.

"These lalten wallahs too could have brought electricity to the homes of the people while they were in power. But they were busy lighting up their own clan. Somebody was building a farm house, somebody was constructing a mall, somebody making money through railway tenders", Modi said in an obvious dig at the IRCTC scam which pertains to the period while Lalu Prasad was the Railway Minister.

His wife Rabri Devi, daughter Misa Bharti and son Tejashwi Yadav are among those named as co-accused in the case and a number of their alleged benami properties in Patna and the NCR region have been seized by investigating agencies in course of probe.

The PM was referring to power situation in Bihar during the 15-year rule of RJD (from 1990 to 2005) and now under NDA, when all the households in the state have been provided electricity connection by the end of last year.

Donning a Mithila paag (headgear), Modi began his 25-minute-long speech with a few sentences in Maithili wherein he recalled the regions glorious past which produced luminaries like King Janaka and poet Vidyapati.

He also promised that during his next stint in power measures would be taken to give a boost to fisheries and makhana (fox nuts) for which there was immense potential in the Mithila region.

In an apparent reference to local RJD candidate Abdul Bari Siddiqui, who had said a few days ago that he could not recite Vande Mataram because of his monotheistic religious beliefs though he had no problem with saying Bharat Mata Ki Jai, The Prime Minister quipped should not such people be made to forfeit their deposits.

Siddiqui is locked in a straight contest with BJPs Gopal Ji Thakur in Darbhanga. Thakur has replaced two term BJP MP Kirti Azad, who has switched sides to Congress, which has fielded him from Dhanbad Lok Sabha seat.

Earlier, speaking at the same rally Nitish Kumar criticized the Congress promise of waiver of farmers loans saying it betrayed a lack of understanding of the problems faced by those involved in agriculture and lauded the Modi governments Pradhan Mantri Krishan Samman Nidhi Yojana, which provides an annual assistance of Rs 6,000 to all poor farmers.

It seems they are under the impression that all farmers take loans. This is not the case. But the fact is they all face problems meeting the expenses involved in getting inputs for cultivation. And that is where the Prime Ministers scheme works, Kumar said.

He also thanked Modi for helping the state maintain a rapid growth rate and lauded him for raising the prestige of the country on the global stage.