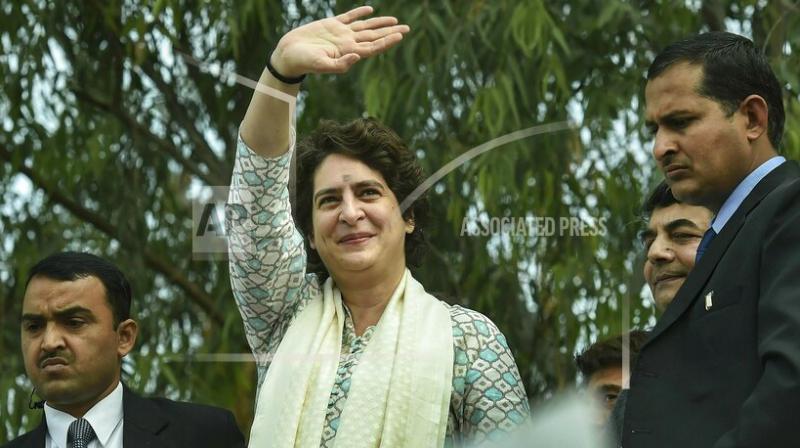 New Delhi: Taking a dig at the Bharatiya Janata Party (BJP) -led government in Uttar Pradesh, Congress general secretary Priyanka Gandhi Vadra on Sunday said these ‘chowkidars’ (watchmen) are only working for the rich and are not bothered about the poor.

Ms Gandhi attacked the Uttar Pradesh government, citing a media report on Twitter that claimed the dues of sugarcane farmers had crossed Rs 10,000 crore in the state.

Uttar Pradesh chief minister Yogi Adityanath was quick to rebut Ms Gandhi’s claim, and asked where were the farmers’ well-wishers during 2012-17, when they faced starvation.

“The families of sugarcane farmers toil day and night but the Uttar Pradesh government does not even take the responsibility of paying their dues,” said Ms Gandhi.

She added that “The figure, Rs 10,000 crore of farmers’ dues means everything, including their children’s education, food, health, and the next produce comes to a standstill. These chowkidars only work for the rich and do not care about the poor”.

All the BJP leaders in the country had recently followed Prime Minister Narendra Modi in adding ‘chowkidar’ to their Twitter handles, after Mr Modi claimed that he was a ‘chowkidar’ (watchman) of the country and would not allow any wrongdoing.

Replying to Ms Gandhi’s comments, Mr Adityanath said, “When our government was formed, the pending cane dues were around Rs 57,800 crore. The amount was bigger than the budgets of many of the states, but we paid it.”

Attacking the previous governments, Mr Adityanath said, “In the previous regimes of the SP and BSP, nothing was done for the sugarcane farmers and as a result, they died of starvation (bhukhmari).”

Seeking to put the records straight, Mr Adityanath said, “The sugarcane cultivation area in the state has increased by 22 per cent to 28 lakh hectare, and a number of closed sugar mills have been restarted. The farmers are happy (khushaal) now.”