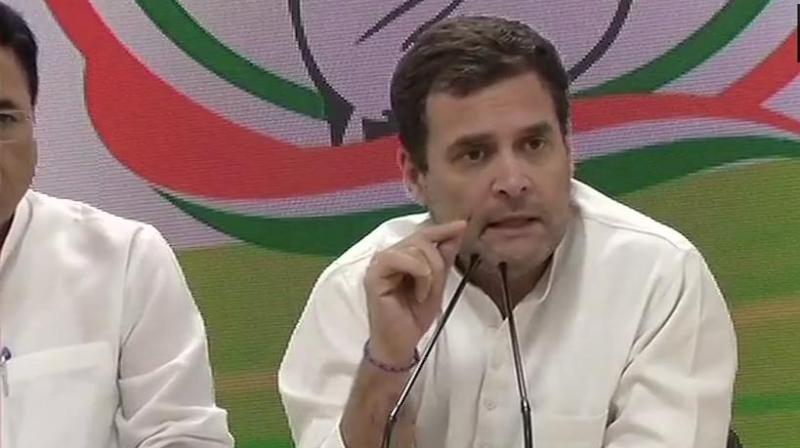 Gandhi said the Congress has studied the fiscal implications of the scheme and consulted renowned economists and experts before finalising the scheme. (Photo: ANI | Twitter)

“I want to tell the poor that the line would be Rs 12,000… The Congress guarantees that 20 per cent of India’s poor would make at least Rs 72,000 annually,” he said, describing it as a historic move.

Explaining the scheme, Gandhi said this does not mean that everyone would get Rs 12,000. He said that if a family makes Rs 6,000, the government would chip in the rest to raise the monthly family income to Rs 12,000.

Gandhi said, "It is an extremely powerful, ground-breaking and well-thought through idea. We have consulted many economists on the scheme."

"Final assault on poverty has begun. We will wipe out poverty from the country," he said.

Gandhi said the Congress has studied the fiscal implications of the scheme and consulted renowned economists and experts before finalising the scheme.

The Congress chief insisted that the plan was “fiscally prudent” and implementable.

"People have suffered in the last five years and we are going to give justice to them," he added.

This announcement came after the Congress Working Committee (CWC), the party’s top policy-making body had met.