Yadav chose to start his campaign from a constituency where polling is scheduled to be held in the fifth phase. 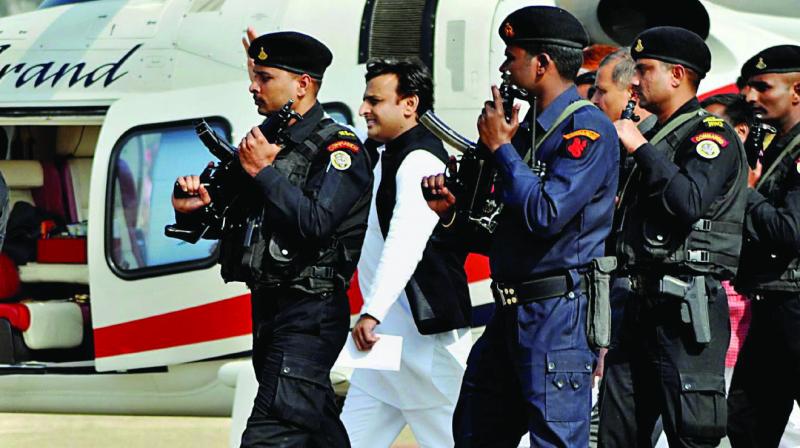 Lucknow: Samajwadi Party president and UP chief minister Akhilesh Yadav, on Tuesday, launched his party’s campaign from Sultanpur by accusing the Centre of trying to emulate his policies in the upcoming Union Budget.

Significantly, Mr Yadav chose to start his campaign from a constituency where polling is scheduled to be held in the fifth phase on February 27. The CM, in his campaign, will not be using his much-publicised Mercedes bus due to paucity of time. He will travel on a helicopter and address two to three meetings in a day.

Congress vice-president Rahul Gandhi, on the other hand, will soon launch his campaign from western Uttar Pradesh where polling is to be held in the first phase on February 11.

According to Congress sources, Mr Gandhi will be addressing about six rallies in this region, including Mathura, Saharanpur, Ghaziabad, Shamli, Bulandshahr and Aligarh.

After the alliance between the Congress and Samajwadi Party, both are now reworking their election strategy and sources says that Mr Gandhi and Mr Yadav could address about half-a-dozen rallies — one in each phase — across the state. Three rallies are likely to be held in constituencies where the Congress candidates are contesting and three in SP constituencies.

“The idea is to send a clear message to workers in both parties as well as the voters that the alliance is for keeps. However, a number of modalities have to be worked out before the programme is finalised,” said a source. Mr Yadav highlighted the achievements of his government and also threw light on his manifesto for the Assembly polls.

However, it is believed that during their joint rallies, both the leaders will focus on the failures of the Modi government, the lack of development in the BSP regimes and the need to keep divisive forces at bay.