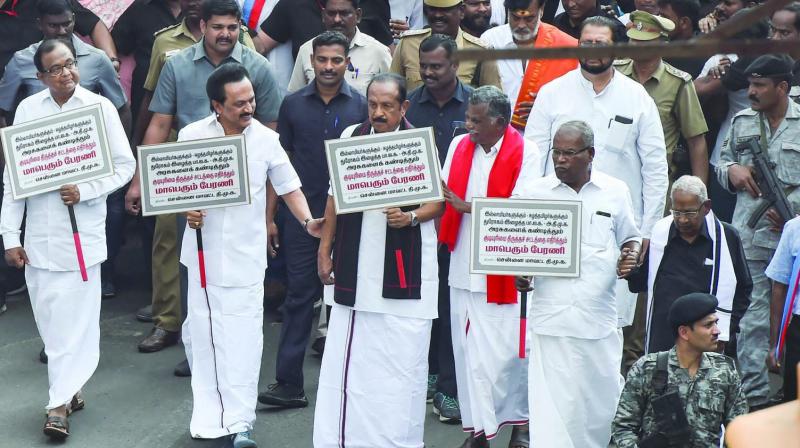 New Delhi: Protests against the Citizenship (Amendmant) Act and the National Register of Citizens continued across the country and abroad on Monday with huge turnouts in Delhi, Chennai and Bengaluru.

Even as allegations surfaced on Monday that actress and Congress activist Sadaf Jafar, arrested on December 19 and since lodged in Lucknow jail, was brutally tortured by the UP police, in Delhi, 46 students were arrested and over 120 detained even before they could begin their protest against police brutality in Uttar Pradesh where crackdown on protesters continued.

Both the BJP and the Congress were out on the streets on Monday — one in favour of CAA, NRC and the another against it. Opposing the CAA and NRC, the Congress held a dharna at Rajghat where party president Sonia Gandhi read the Preamble to the Constitution. After her, Dr Manmohan Singh and Rahul Gandhi also read out the Preamble at the party’s Satyagrah for Unity. In Kolkata, the BJP took out a rally in support of the CAA. It was led by the party’s acting president J.P. Nadda. However, in a fresh setback to the BJP, Andhra Pradesh chief minister Jaganm-ohan Reddy declared that his government will stand with the minorities and will not support NRC at any cost.

In UP, despite allegations of police excesses, the state government continued its crackdown on protesters and seized properties of the alleged “rioters”.

The arrest of Ms Jafar has become a fresh flashpoint, with the Congress alleging that she was given treatment worse than “third degree” by the police, an allegation that UP Police has denied.

Congress general secretary Priyanka Gandhi Vadra had on Sunday demanded the immediate release of Ms Jafar. “She (Jafar) was beaten brutally by the police. She was hit on her back and her hair was pulled,” said Congress state president Ajay Kumar Lallu, who met Ms Jafar in jail on Monday.

Mr Lallu claimed Ms Jafar was peacefully protesting against CAA when “some 10-15 youths came who had stones in their bags started hurling them. They were allowed to go by the police and she was arrested. It was all sponsored. The state government was behind the violence,” Mr Lallu said

“Jafar was arrested from the spot due to her involvement in clashes along with others. We sent her to jail after conducting her medical. We have enough evidence against her. All her charges are baseless,” ASP, East, Suresh Chandra Rawat, said.

In videos widely shared on social media, Ms Jafar can be heard saying, “Why are you not stopping them? When there is violence, you are standing and watching the show. What is the use of the helmet? Why aren’t you doing anything?”

In UP, 17 people have died and 263 police personnel injured in anti-CAA protests. Restrictions on mobile Internet services are still in place in the state. UP Police said they have arrested the state head of the Islamic outfit Popular Front of India (PFI) and his two aides for allegedly masterminding violence in Lucknow during the protests last week. In Rampur, police said 31 people have been arrested and over 150 others identified for their alleged role in the violence that broke out last Saturday.

Meanwhile, Aligarh’s senior superintendent of police Akash Kulhari said he was ready to face an inquiry over allegations on social media that stun grenades were used by police during a protest by AMU students last week. However, the officer could not confirm if the non-lethal weapon was used by the Rapid Action Force (RAF), saying police will speak with the paramilitary force’s officials to “ascertain the truth”.

Some video clips in which loud explosions can be heard and huge flames can be seen during Sunday’s clashes have surfaced. The SSP said police are examining all such electronic evidence before reaching a conclusion.

In Delhi, 46 students were detained outside the Uttar Pradesh Bhawan when they were about to begin a protest against the police’s action during anti-CAA demonstrations in the state. The protesters were demanding the resignation of Uttar Pradesh chief minister Yogi Adityanath over the issue.

The protests at Delhi’s Jamia Millia Islamia entered their eighth day on Monday, with hundreds continuing to throng the streets outside the university. Students from several schools in Noornagar, Batla House and Okhla, who joined the protests on Monday, asked how many detention centres will the government build if all Muslims, Christians and other minorities are “outsiders” and “illegal migrants”.

A Delhi court on Monday dismissed bail pleas of 15 people arrested in connection with the violence in Delhi’s Daryaganj area last week and extended their judicial custody by two weeks. Metropolitan magistrate Kapil Kumar dismissed the bail applications, saying there was no sufficient ground to grant them the relief.

Huge gatherings were seen at a protest rally in Chennai that was led by DMK and its allies. DMK president M.K. Stalin, Congress leader P. Chidambaram, and MDMK chief Vaiko and state unit leaders of the Left parties marched from downtown Egmore towards the Rajarathinam Stadium.

“This is not just a rally. This is a contingent that can fight a war. I thank the cadre of all alliance partners and the general public for having made the rally a success. The protests won’t end till the Centre withdraws the legislation. We will continue our protests till the BJP Government withdraws the CAA,” Mr Stalin said in his brief address to party cadres.

Anti NRC, CAA rally in Bengaluru too had a huge crowd, causing massive road jams. It is learnt that Karnataka chief minister B.S. Yediyurappa had asked the police to stay alert and not to allow a Mangaluru-like situation to develop in the city. Former Karnataka CM Siddaramaiah has demanded a judicial probe into Mangaluru violence last week and rejected CID inquiry ordered by Mr Yediyurappa.

In Kerala, Youth League, the youth wing of the Indian Union Muslim League (IUML), protested in front of post-offices. However, in Kozhikode, three migrant labourers from West Bengal were assaulted by unidentified people for allegedly taking part in anti-CAA protests. The Murshidabad natives were beaten up on Sunday night after they returned from a protest march organised at Nadapuram.

In Guwahati, former chief minister and veteran Asom Gana Parishad (AGP) leader Prafulla Kumar Mahanta staged a sit-in demonstration with supporters. Expressing his strong opposition to the amended CAA, Mr Mahanta said that India is moving in the same direction as that of “Hitler’s Nazi Germany”. Criticising the leadership of his own party, he alleged that AGP’s present leaders have “betrayed the people of Assam only for greed of power”.

The issue of CAA has been a major flashpoint in Bengal politics, with chief minister and TMC supremo Mamata Banerjee declaring that it will not be implemented in the state. The state had witnessed violent protests and arson against the CAA and the proposed nationwide implementation of National Register of Citizens (NRC) from December 13 to 17.

In a setback to Ms Banerjee, the Calcutta high court on Monday directed the West Bengal government to suspend all media campaigns related to the CAA.

Another pro-CAA rally was held in Jammu, where the J&K administration has been otherwise stalling all CAA protest rallies. A body representing the displaced people of Pakistan-occupied Kashmir (PoK) also held a demonstration.

Similarly, in Srinagar, the National Conference (NC) during its provincial-level meeting passed two resolutions condemning the CAA and demanding immediate release of the detained political leaders and civil society members in Kashmir. In the resolutions, the party also criticised “the violence in Jamia  Millia Islamia and Aligarh Muslim University,” and the attempts to “marginalise” the Muslim community, the NC spokesperson said.