Interspersed with Bhajans, the party leaders, led by Mrs Gandhi, read the Preamble of the constitution. 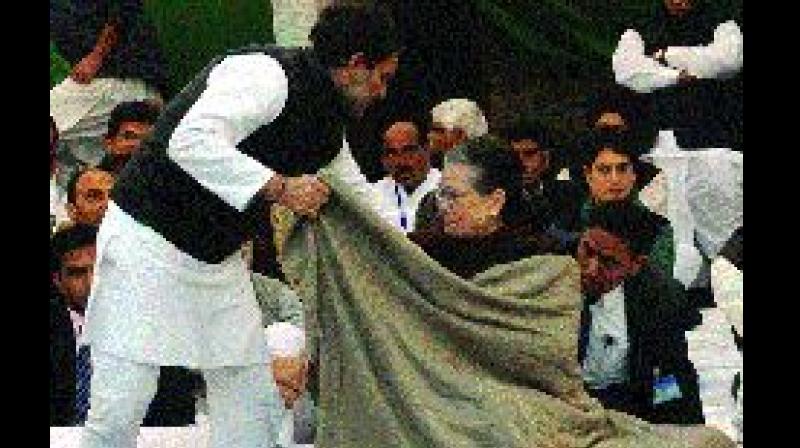 New Delhi: Buoyed by the party’s performance in Jharkhand, the Congress party put up a massive show of strength at Rajghat on Monday with the top leadership led by chief Sonia Gandhi and former Prime Minister Manmohan Singh sitting on a Satyagraha against the CAA and NRC.

Interspersed with Bhajans, the party leaders, led by Mrs Gandhi, read the Preamble of the constitution. The “Satyagraha for Unity” was attended by the who is who of the Congress party, including former Congress President Rahul Gandhi, senior leaders Ahmed Patel, Ghulam Nabi Azad, Motilal Vohra and Anand Sharma among others.

The two Congress chief ministers present— Madhya Pradesh CM Kamal Nath and his Rajasthan counterpart Ashok Gehlot said that the Citizenship Amendment Act would not be implemented in their states as it was against the basic principles of the Constitution.

A similar assertion was made by Chhattisgarh minister T.S. Singh Deo, on behalf of his CM Bhupesh Baghel.

“The identity of India is through its Constitution. We reject this law, and while respecting the Constitution, our government will not implement it,” Mr Nath said to loud cheers from workers at the protest.

Mr Gehlot alleged that an atmosphere of fear had been created by the BJP-led government and democracy is in danger. “The Prime Minister is misleading people on the NRC saying it was not discussed, while home minister was saying NRC will be implemented. The country understands that they want to divide the country on religious lines”.

“This is RSS agenda that they want to implement. In Rajasthan, the CAA and the NRC will not be implemented as they are against the basic principles of the Constitution,” the CM said.

Congress’ General Secretary in-charge of Uttar Pradesh Priyanka Gandhi Vadra said her party resolves to protect the Constitution in the name of all those who had been “martyred” in the protests against the amended citizenship law.