Jharkhand Mukti Morcha’s Hemant Soren is poised to be the next chief minister. 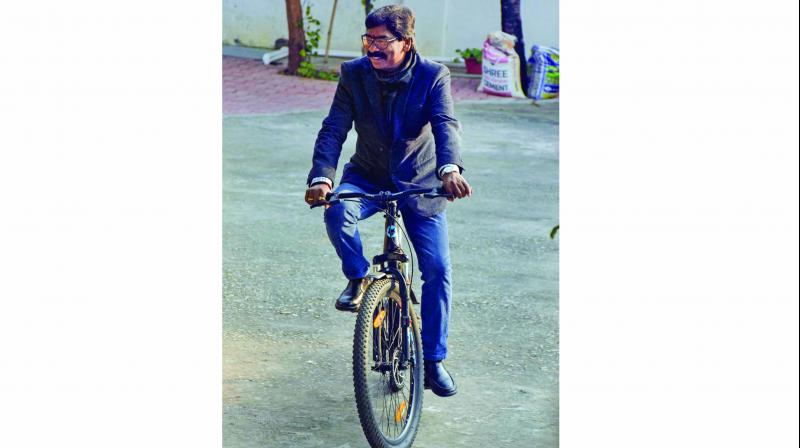 New Delhi/Patna: In a major blow to the Bharatiya Janata Party after it lost Maharashtra, yet another state slipped out of its hands on Monday as Jharkhand elected a government of the JMM-Congress-RJD alliance. Adding insult to injury, BJP chief minister Raghubar Das lost from his home turf of Jamshedpur (East).

Jharkhand Mukti Morcha’s Hemant Soren is poised to be the next chief minister.

Talking to reporters in Ranchi, Mr Soren, who is the JMM’s working president, said that he will soon call a meeting of all alliance partners to discuss the future course of action. He also used the occasion to thank his father and party chief Shibu Soren whom he addressed as “Guruji”, RJD chief Lalu Prasad Yadav, former Congress president Rahul Gandhi, Priyanka Gandhi and Congress chief Sonia Gandhi for “forming a grand alliance against the BJP”.

“I am thankful to everyone who believed in me and I assure that I will never let them down. We will soon meet and discuss our future course of action,” Mr Soren said.

Jharkhand went to polls for 81 Assembly seats in five phases from November 30 to December 20. The BJP, JMM, Congress, RJD, AJSU and JVM-P were the main political parties in the fray. The primary fight, however, was between the BJP and the JMM-Congress-RJD alliance.

In an election fought largely over local issues, the BJP was virtually decimated with the JMM-Congress-RJD winning 46 seats, comfortably crossing the magic mark of 41 seats. The BJP won 25
seats, which is 12 seats less than its tally in the last Assembly polls.

While the Congress improved its tally from six to 16 seats, the RJD bagged one of the seven seats it contested.

While economic distress and issues like tribal land acquisition laws and reservation in government jobs for state residents were the issues which bit the ruling BJP, it was evident that national issues like the recent amendment to the citizenship law and the promise of implementing the National Registrar of Citizens (NRC) across the country did not find much resonance with the masses. Neither did the abrogation of Article 370 in Kashmir, which was another major legislation passed by the BJP government at the Centre.

Another major factor for the BJP’s loss was the unpopularity of Mr Das, especially amongst former allies like All Jharkhand Students Union (AJSU). In fact, AJSU cadre maintained that the polls were fought only on the “Oust Raghubar Das” slogan.

Mr Das was defeated by his colleague and former minister Saryu Rai. Mr Rai quit the BJP after being denied ticket from Jamshedpur (West) seat and contested the poll from Jamshedpur (East), a seat held by Mr Das five times, as an Independent.

Jharkhand, which was created in November 2000 for the welfare of the people of the region, particularly tribals who constitute around 27 per cent of the state’s population, had given the BJP-AJSU alliance 12 of the 14 Lok Sabha seats in May this year.

Just six months after the general elections, the state decided to oust the BJP, which went alone in the Assembly polls as AJSU was not happy with Mr Das and the seat sharing formula. Many in the BJP had questioned the ticket distribution and had blamed Mr Das for ignoring the winnability factor of candidates and trying to sideline many senior leaders.

This was why the BJP top brass, including PM Narendra Modi, had sought votes for a “double engine ki sarkar (BJP government at the Centre and the state),” and put up hoardings with pictures of Mr Modi and Mr Das together. Despite this, the state rejected the BJP government and its non-tribal chief minister.

Though the BJP’s poll managers were expecting the party’s tally to go down, as feedback reaching them was not in their favour, they did not expect the total tally to go down so much.

“It is not that there was no development in the last five years… check on Naxalism and development, including in Naxal pockets —this government’s work is evident… but Raghubar Das’ arrogance and the way he treated the cadre led to the BJP losing the state and Mr Das losing his own seat,” said a senior BJP leader from the state.

JMM chief Hemant Soren, who is likely to take oath as the state next chief Minister soon, said, “Even the business community in Jharkhand is unhappy with the BJP. Today a new chapter will begin for this state. I want to assure everyone that their hopes will not be broken irrespective of their caste, creed, religion and profession”.

Taking a pot-shot at Mr Das and the BJP, Tejashwi Yadav, leader of alliance partner RJD, said, “The mood was against the state government as well as the Centre which failed in providing relief to the people from poverty and unemployment. People were also upset due to deteriorating law and order scenario in the state”.

In the last one year, Jharkhand is the fifth state that the BJP has lost. Others include Maharashtra, Chhattisgarh, Rajasthan and Madhya Pradesh. Just like the other four states, which were ruled by the BJP, the party lost Jharkhand because of a strong anti-incumbency faced by chief minister Raghubar Das.