Congress had fielded Nooman Masood from the Gangoh seat, who lost to BJP's Kirat Singh by over 5,000 votes. 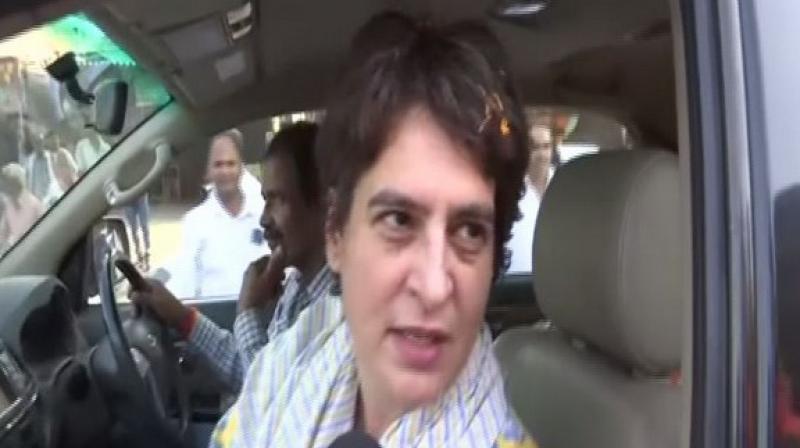 Vadra had earlier put out a tweet, in Hindi, which roughly translates to, 'The BJP is so arrogant that its minister expelled our candidate,' (Photo: File)

Raebareli: Congress general secretary Priyanka Gandhi Vadra on Thursday accused the Uttar Pradesh administration of interfering in the counting process of Gangoh by-elections and urged the Election Commission to investigate into the matter.

"Our candidate was winning from the Gangoh seat when he was expelled from the counting centre. The District Magistrate was repeatedly getting calls to do so. We urge the Election Commission to conduct an unbiased investigation into the matter," Vadra told ANI here.

Congress had fielded Nooman Masood from the Gangoh seat, who lost to BJP's Kirat Singh by over 5,000 votes.

Vadra had earlier put out a tweet, in Hindi, which roughly translates to, "The BJP is so arrogant that its minister expelled our candidate, who was about to win from the Gangoh seat, from the counting centre and tried to change the mandate given by the public. The DM got five calls on his phone with orders to decrease the lead (of our candidate). This is a blatant disrespect of democracy."

"I have not seen the latest trends, but am really happy at both (Haryana and Maharashtra). We also are happy about the fact that here in UP our vote percentage has increased," Vadra told ANI here.

Voting for 11 assembly seats in the Uttar Pradesh, along with 288 and 90 seats of Maharashtra and Haryana had taken place on October 21. While the BJP seems all set to retain Maharashtra, there is a close contest between the two national parties in Haryana.

Out of the 11 seats in Uttar Pradesh, BJP is leading on 7 seats while SP is leading on 2 while BSP and Apna Dal (Sonelal) seem set to win one seat each.
Though the Congress is not leading on any seats in UP, it has managed to achieve 12.32 per cent vote share in the state.