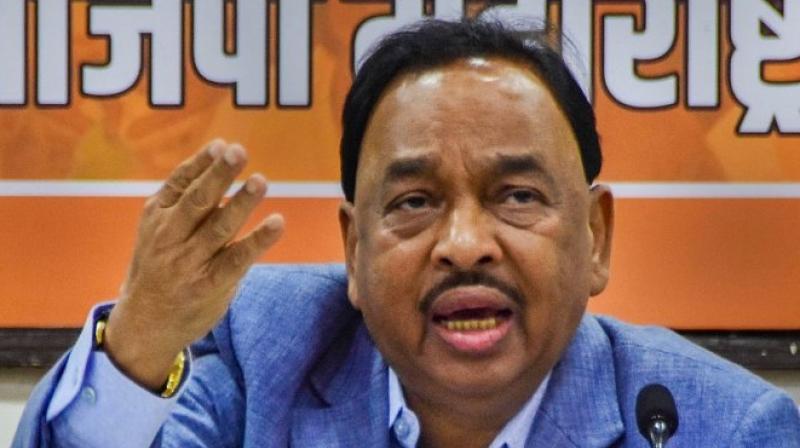 Mumbai: Union minister Narayan Rane has sparked off a row over his remarks about slapping Maharashtra Chief Minister Uddhav Thackeray for what he claimed as the latter's ignorance of the year of India's independence.

There is speculation that Rane may be arrested over the remarks against the chief minister. Some reports said a team of Nashik police has left for Chiplun in Konkan region, where Rane is present now, after a complaint against the Union minister over the remarks. There is no word yet from the police on these developments.

It is shameful that the chief minister does not know the year of independence. He leaned back to enquire about the count of years of independence during his speech. Had I been there, I would have given (him) a tight slap, Rane said during his Jan Ashirwad Yatra in adjoining Raigad district on Monday.

Rane's remarks drew sharp reactions from Shiv Sena, whose workers put several posters in Mumbai and other places, calling him a kombdi chor' (chicken stealer), a reference to the poultry shop he ran in Chembur five decades ago, during his initial stint with the Bal Thackeray-led party.

To impress BJP leadership, Rane has been attacking Shiv Sena and its leaders. He lost his mental balance after his induction into the Modi-led ministry. Modi should show him the door, Raut said.

Rane flagged off his political life in Mumbai with the son-of-the-soil party led by Bal Thackeray in the late 1960s. He entered the Maharashtra Assembly in 1990 as a Sena MLA.

In February 1999 he was sworn in as Maharashtra's 13th chief minister. That stint was short as the then Shiv Sena-BJP combine lost the state Assembly elections held later that year.

In 2005, Rane parted ways with the Shiv Sena following irreconcilable differences with the Thackerays.

After quitting the Sena, he joined the Congress and was made state revenue minister. He quit the Congress in 2017, saying he had joined it on assurance of being put in the state's top position in six months.

He founded the Maharashtra Swabhiman Paksha with his two sons Nilesh and Nitesh as his key generals but later merged it with the BJP.

Over the years, Rane's rivals have linked him to several incidents of violence, claiming his involvement in the murder of a Sena worker and some other crimes in Konkan's Sindhudurg district.