Gehlot said he had a majority and things would be crystal clear in the Assembly. 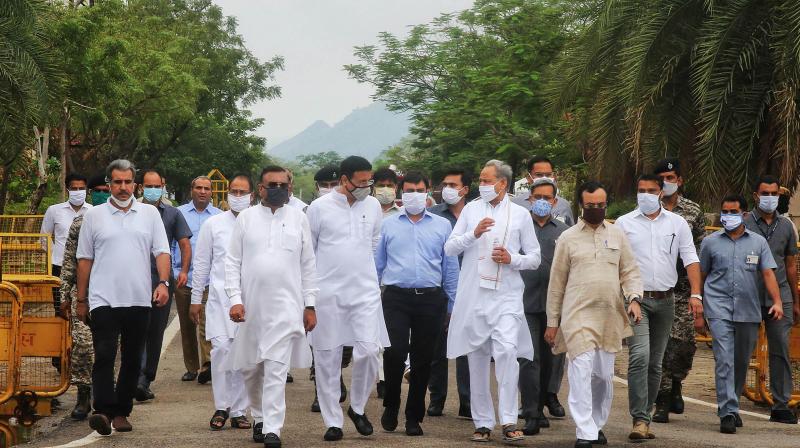 Rajasthan CM Ashok Gehlot with Congress leaders ahead of his media briefing. (PTI)

Jaipur: Rajasthan Chief Minister Ashok Gehlot accused Governor Kalraj Mishra on Friday of being under pressure to not call an Assembly session.

Gehlot said the state government requested the governor to call a session, but he had not yet issued the order.

"We want an Assembly session from Monday," the chief minister told reporters outside the hotel where the legislators supporting him are camping. "The governor is not giving orders for calling Assembly session under pressure."

After the recent cabinet meeting, Gehlot said, the governor was requested through a letter to hold Assembly session to discuss political situation, review the coronavirus pandemic and its effects on the state's economic situation.

"We hoped that governor would issue an order to call Assembly session yesterday night itself. I waited overnight but still there is no reply from his side," he said.

"It is beyond our comprehension because simple procedures are adopted. The governor has to give orders. There is no reason for him to stop."

The chief minister said the governor was holding a constitutional post and he should immediately take a decision to maintain the dignity of post.

"Otherwise, all our MLAs will come to Raj Bhawan and collectively request you please give your decision immediately," he said.

After addressing the media persons, Gehlot called for party's legislature meeting in the hotel.

The chief minister urged the governor to decide on the basis of his conscience.

Otherwise, he added, they would "not be responsible" if people of the state gherao the Raj Bhawan.

Gehlot said he had a majority and things would be crystal clear in the Assembly.

Referring to the disgruntled Congress MLAs camping in Haryana, Gehlot said: "This whole game is a conspiracy of the BJP and its leaders. Just like they did in Karnataka, Madhya Pradesh and other states , they want to do in Rajasthan."

"But in Rajasthan, the people of the entire state, the entire MLAs are with us," he added.