The Opposition BJP cried foul, saying the ruling party MLAs were delaying the trust vote while hoping for some relief from the Supreme Court. 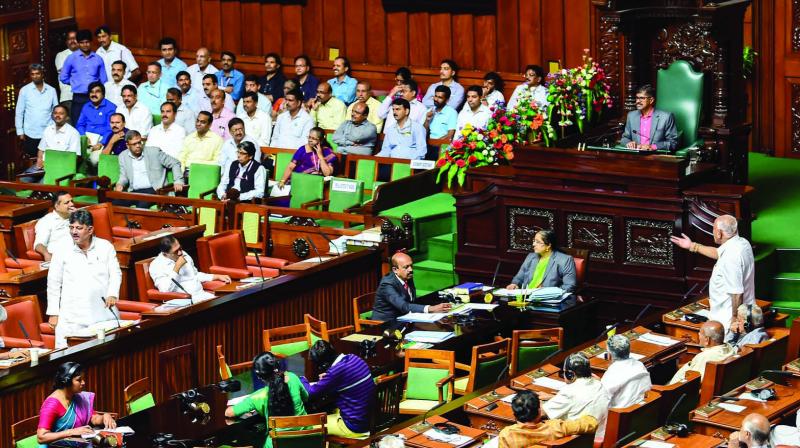 Bengaluru: The Congress-Janata Dal (S) alliance government’s turbulent 14 months in power ended on Tuesday after chief minister H.D. Kumaraswamy lost the trust vote in the state Assembly by a margin of six votes, after four full days of tortuous debate and delaying tactics, ending the Congress’ hold over its last bastion in the South, leaving it with just four states and one Union territory.

Capping a three-week-long high-voltage intense power struggle triggered by a raft of resignations by rebel legislators that pushed the government to the brink of collapse, the confidence motion was defeated with 99 members voting for the motion and 105 against it, with two Independent MLAs R. Shankar and H. Nagesh and lone BSP MLA N. Mahesh abstaining from the voting.

Acting swiftly, BSP supremo Mayawati expelled Mr Mahesh from the party as she had specifically instructed him to support the coalition during the trust vote.

The Congress on Tuesday was quick to accuse the BJP of carrying out “one of the most heinous” horse-trading cases the country has ever seen and said that it will hold nationwide protests against the “immoral political destabilisation”.

What finally brought about the downfall of the Kumaraswamy government was the rebellion by 15 MLAs of the Congress and JD(S), now camping in Mumbai — allegedly under the BJP’s protection — who did not return to Bengaluru or participate in the trust vote proceedings, sounding the death knell for the coalition government.

Soon after he lost the vote, Mr Kumaraswamy, who had said earlier that he was ready “to happily sacrifice his position” and would not “drag the vote”, submitted his resignation to governor Vajubhai Vala. He was accompanied by deputy CM G. Parameshwar and other senior colleagues, paving the way for the installation of a new BJP government headed by BJP state president B.S. Yeddyurappa, who has indicated he could swear in a Cabinet this coming Monday.

The governor has instructed Mr Kumaraswamy to continue till alternative arrangements are made and also reminded him that no executive decisions should be taken during this period.

If and when Mr Yeddyurappa takes over as CM, it will be his fourth stint in the top post — he headed a shortlived BJP-JD(S) government in 2007 which collapsed after the JD(S) refused to back him under a 20-20 month power-sharing deal.

Mr Yeddyurappa swept back to power in 2008,  alleging betrayal by the JD(S), and remained CM for three years before resigning in 2011 following his alleged involvement in illegal mining and land deal scams. His latest stint as CM was for only three days in 2018 after the BJP became the single largest party in the state Assembly, with 104 MLAs, but could not prove its majority in the House. Jubilant MLAs of the BJP are now set to meet at a resort on the outskirts of Bengaluru on Wednesday to formally elect Mr Yeddyurappa as the legislature party leader. Mr Kumaraswamy had sought the trust vote on Thursday last with the debate dragging on interminably for four days and the issue also reaching the Supreme Court. Voting could not be held despite the governor setting two deadlines because of the opposition from ruling coalition MLAs who insisted that the debate should conclude and a decision should be taken on the resignations of the rebel MLAs before voting happened. The Opposition BJP cried foul, saying the ruling party MLAs were delaying the trust vote while hoping for some relief from the Supreme Court.

The court’s ruling that the rebels “cannot be  compelled to participate in the trust vote proceedings in the Assembly” proved to be the last nail in the coffin of the coalition government, virtually freeing them from the whip issued by their respective parties.

On Tuesday, meanwhile, 13 of the rebel MLAs wrote to the Speaker asking for more time (four weeks) to meet him over a disqualification notice issued against them.

The rebels are now set to return to Bengaluru on Wednesday after ensuring the exit of the coalition government and are likely to discuss the role they should play in the new government, with reports doing the rounds that as many as nine of them could become ministers.

Fearing a backlash after the collapse of the government, the city police clamped prohibitory orders banning large gatherings after a clash between

Congress and BJP workers near an apartment in the city where the two Independent MLAs who switched sides from the coalition to the BJP, were reportedly staying.

Reactions poured in soon after the collapse of the government with former CM Siddaramaiah flaying the BJP for gaining access to power through the backdoor and said an “unethical, illegal and anti-constitutional government” was coming to power in Karnataka.

There is also a questionmark over the continuation of the Congress-JD(S) coalition after the government lost the confidence vote in the Assembly with KPCC president Dinesh Gundurao telling this newspaper that it was a difficult question to answer. “I cannot reply to this, I have to consult other senior leaders here and in Delhi and then we will take a decision,” he said.

Notwithstanding the euphoria over the formation of a new BJP government led by B.S. Yeddyurappa, the top brass of the party is reportedly in two minds over forming the government and is reportedly getting feedback from the RSS and various senior leaders before deciding if President’s Rule was a better option than government formation.

For one, the leadership is concerned about the disqualification procedure involving the rebel MLAs  and feels that if it drags on for too long, it may impact the prospects of the new government. They are also assessing the popularity of former CM and Congress leader Siddaramaiah in north Karnataka, and if he could swing votes in a big way if snap polls are held.