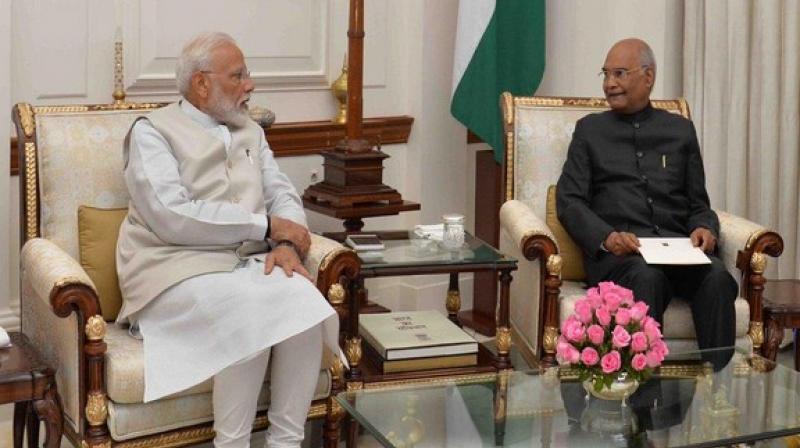 The Election Commission will then issue a formal notification constituting the new House. (Photo: ANi twitter)

New Delhi: Prime Minister Narendra Modi on Friday met the President Ram Nath Kovind and tendered the resignation of his government, paving the way for the formation of a new dispensation under his leadership following victory in the Lok Sabha elections.

The President accepted the resignation and requested Modi and his council of ministers to continue in office till the new government takes charge.

"Prime Minister Narendra Modi called on President Kovind at Rashtrapati Bhavan. The Prime Minister tendered his resignation along with the Union Council of Ministers", tweeted the official handle of President of India.

Modi's meeting with President Kovind comes after the Union Cabinet met on Friday and adopted a resolution for the dissolution of the 16th Lok Sabha, setting in motion the process of constituting the new House.

Finance Minister Arun Jaitley, who has some health problems, did not attend the Cabinet meeting as he was stated to be unwell.

The Election Commission will then issue a formal notification constituting the new House.

Meanwhile, a meeting of the National Democratic Alliance (NDA) will be held on May 25 when Modi will be formally elected leader of the coalition before the President will invite him to form the next government. It is speculated that the new government under Modi may be sworn-in on May 30.

With the official count in the Lok Sabha elections over on Friday, the BJP has secured 303 seats, which is 22 more than it got in the 2014 elections and along with its allies, the NDA took its tally up to 352 in the 17th Lok Sabha.