Accusing opposition BJP of trying to destabilise the government, Parameshwara said the ruling coalition would not allow them to succeed. 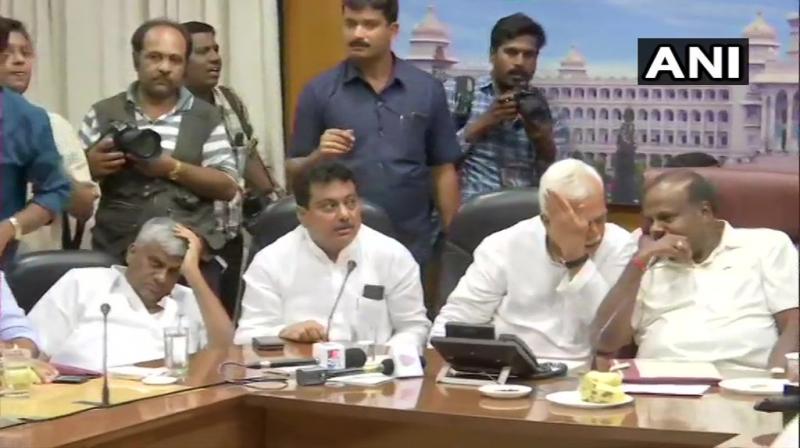 Asserting that all their MLAs were with them, Deputy CM G Parameshwara said the coalition would continue under Kumaraswamy's leadership and that there was no threat to the government. (Photo: ANI)

Bengaluru: A day after suffering a rout in the Lok Sabha elections, the Karnataka cabinet on Friday reposed its 'faith and confidence' in the leadership of Chief Minister H D Kumaraswamy, asserting the Congress-JD(S) coalition would continue.

Briefing reporters after an informal cabinet meeting convened to take stock of the dismal show of the coalition partners, deputy chief minister G Parameshwara said the mandate on Thursday was for the government at the Centre and not for the state.

Accusing the opposition BJP of trying to destabilise the government, Parameshwara said the ruling coalition would not allow them to succeed. "... we have reposed our faith and confidence in the leadership of chief minister Kumaraswamy. This is the decision taken by all the ministers today," said Parameshwara.

Asserting that all their MLAs were with them, he said the coalition would continue under Kumaraswamy's leadership and that there was no threat to the government.

Steamrolling the ruling Congress-JD(S) alliance, the BJP on Thursday had scored a resounding win bagging 25 out of the total 28 Lok Sabha seats in an outcome that left the one-year old Kumaraswamy government in a tizzy over its stability.

With the BJP dealing a hammer blow, the Congress and JD(S)managed to win only one seat each, indicating that neither arithmetic nor chemistry worked for the two which apparently has failed to reconcile with each other at the ground level.

This is said to be the worst-ever performance by the Congress in the state as against a record of sorts by the BJP. Karnataka emerged as the bright spot for the saffron party in the South with other neighbouring states bucking the "Modi magic".