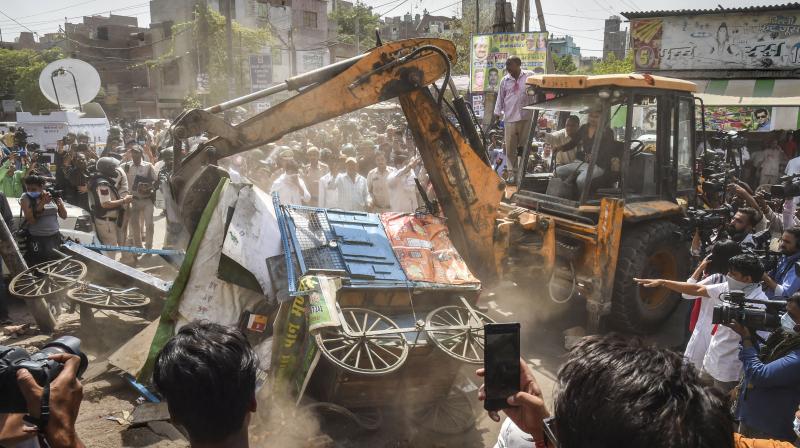 Chidambaram said that based on information in the public domain, it appears that most of the houses and shops that were demolished belonged to Muslims and the poor. (PTI file image)

New Delhi: The recent bulldozer-enabled demolitions reflect a "complete breakdown of law and order" and it is fair to assume that this "novel" method of removing encroachments is aimed at the Muslim community and the poor, senior Congress leader and former home minister P Chidambaram said on Sunday.

In an interview with PTI, Chidambaram came down hard on the Jahangirpuri demolitions and those in Madhya Pradesh's Khargone earlier, saying the BJP leaders' justification of the bulldozer-enabled demolitions "flies in the face of the law"

On criticism from certain quarters that the Congress delegation was late by a day in visiting the Jahangirpuri demolition site with Opposition leaders such as Brinda Karat and Asaduddin Owaisi reaching there first, the former Union minister said, "I am not aware of who visited when. I know that a Congress delegation visited the area shortly after the demolitions were carried out. If there was an unexplained delay, I regret it."

"Why do you bring religion into the issue when my concern is the gross and blatant violation of the established legal procedure," he said while responding to a question on whether the alleged delay was due to the Congress fear of the BJP's Muslim appeasement charge.

Asked if the Congress should push for secularism more aggressively in the face of the soft Hindutva charge against the party, Chidambaram said secularism is part of the basic structure of the Constitution and it is a basic foundational value of the Congress.

"It is not enough to remain secular. Everyone must speak the language of secularism and raise a protest when secularism is violated. I cannot accept any departure from secularism," Chidambaram said.

There is nothing to be gained by straying from the straight path, he added.

On "bulldozer politics" becoming the buzzword in the political lexicon in light of the events in Delhi's Jahangirpuri and Madhya Pradesh's Khargone, Chidambaram said the BJP leaders' justification of bulldozer-enabled demolitions "flies in the face of the law".

In every municipality or panchayat law, there are provisions for gathering information on encroachments/illegal constructions, issuing notice to the person concerned to remove the encroachment, giving an opportunity to submit objections, passing a reasoned order, a provision for an appeal and, if the appeal is dismissed, issuing another notice before the demolition squad is deployed, he said.

"Was any of these steps complied with in any of the recent demolitions? That is why there is no law, no order and it is a complete breakdown of law and order. Whose house or shop was demolished is not material," he asserted.

On observations by certain quarters that Muslims were being targeted through such actions, he said that based on information in the public domain, it appears that most of the houses and shops that were demolished belonged to Muslims and the poor.

"If that perception is wrong, the authorities concerned should publish the correct data. As long as the perception remains  and is not contradicted  it is fair to assume that this 'novel' method of removing encroachments/illegal constructions is aimed at the Muslim community and the poor," Chidambaram said.

By the way, there are whole colonies in which the rich live where many houses are illegal constructions, he pointed out.

Those who justify the bulldozer-enabled demolitions without observing the law are digging a hole into which they may fall in the future, the senior Congress leader said.

"I am not raising the question of secularism, I am asking simply 'does law allow such demolitions?' If the answer is no, that is enough to condemn the demolitions. If you ignore the law, you do so at your peril," he said.

Asked about the Aam Aadmi party bringing in Bangladeshis and Rohingyas in the discourse of the Jahangirpuri demolitions, Chidambaram said the AAP is becoming "adventurous" like the BJP.

"I am concerned by the tendency of political parties to see a burning issue as an opportunity to score a political point that has no relevance to the issue at hand," he said.

The issues of Bangladeshis and Rohingyas have nothing to do with bulldozer-enabled demolitions, Chidambaram stressed.

Several concrete and temporary structures close to a mosque in Jahangirpuri were brought down last week as part of an anti-encroachment drive by the BJP-ruled North MCD, days after the northwest Delhi neighbourhood was rocked by communal violence. The Supreme Court had to intervene twice to stop the drive after it took cognisance of a petition filed by Jamiat Ulema-e-Hind against the demolition.

A delegation of Congress leaders visited violence-hit Jahangirpuri on Thursday but were stopped by the police from going to the area where the anti-encroachment drive was conducted by the North MCD a day before.

Earlier this month, the Madhya Pradesh government launched a drive in Khargone against "illegal" properties allegedly belonging to those involved in the stone-pelting and other forms of violence that broke out during a Ram Navami procession on April 10.

Several Muslim religious leaders in the state have alleged that members of the community were being unfairly targeted by the authorities following the violence, and houses were demolished in some cases without due process.