Sunny Deol to fight from Gurdaspur

The actor joined the BJP in presence of Union ministers Nirmala Sitharaman and Piyush Goyal. 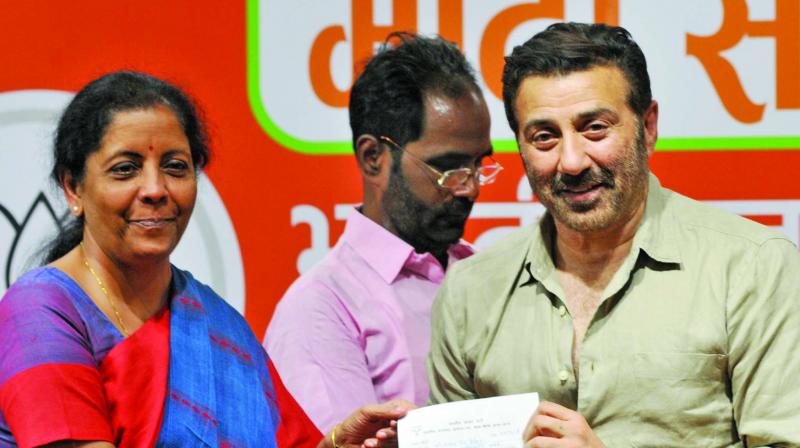 New Delhi: Another member of Bollywood’s Deol family joined the BJP on Tuesday to make a political debut. After veteran actor Dharmendra and wife Hema Malini, Sunny Deol joined the saffron fold and the party fielded him from Punjab’s Gurdaspur constituency. It was actor-turned-politician Vinod Khanna who had represented this seat until his demise in 2017. The party also renominated its Chandigarh MP, Kirron Kher, from the same seat. The BJP also fielded its sitting MLA Som Prakash from the Hoshiarpur seat.

“The way my father (film star Dharmendra) was attached with Atalji, today I have come to join Modiji. Whatever I can do for this family (BJP), I will do it... I won’t talk, I will show you through my work,” said Mr Deol after joining the saffron fold at the party headquarters.

Welcoming the actor in the party fold, Ms Sitharaman said, “The moment we got to know that he is coming to the party, I can only relate to the film Border he had made, post which the impact on the Indian audience of such a theme was really proven...”

The feeling of nationalism and patriotism, when so beautifully evoked through a film, can really touch the core of Indian citizen.

Army is sending letters to all its women officers