Farmers put off stir till May 25 after TN CM plea

The chief minister also talked about the steps the state government had taken to mitigate the hardship of farmers. 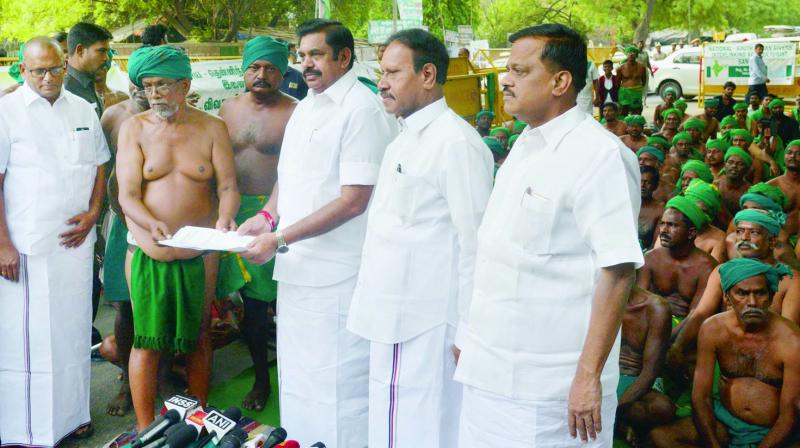 Tamil Nadu Chief Minister Edappadi Palaniswami receives a memorandum from the state farmers who are protesting for the last 39 days over their plight at Jantar Mantar in New Delhi. (Photo: PTI)

New Delhi: Tamil Nadu farmers protesting in New Delhi over drought relief funds and waiver of farmers’ loans, on Sunday, put off their agitation till May 25.

Earlier, Tamil Nadu chief minister Edappadi Palaniswami had urged the farmers from his state, who have been protesting at Jantar Mantar, to call off their strike and assured them of taking up their demands with Prime Minister Narendra Modi.

Mr Palaniswami made the remarks after visiting the farmers at Jantar Mantar for the first time on the 41st day of their protest in which they have been demanding a Rs 40,000-crore drought relief package, farm loan waiver and setting up of the Cauvery Management Board by the Centre.

“I will be taking up the issue of loan waiver, among others, with the Prime Minister while meeting him on Sunday,” Mr Palaniswami said.

The chief minister also talked about the steps the state government had taken to mitigate the hardship of farmers. “We had even submitted a memorandum comprising various demands from the state during my previous meeting with the Prime Minister,” he said. “Therefore, I request the protesting farmers to call off their strike.”

Lok Sabha deputy speaker M. Thambidurai, who also accompanied the CM, said the Tamil Nadu government was working on the demands raised by the protestors.

Asked about the political situation in Tamil Nadu, the chief minister said he would like to comment only on the farmers’ issues. Mr Palaniswami is in the national capital to take part in a Niti Aayog meeting along with chief ministers of other states.

Over the last 40 days, the farmers have turned to increasingly desperate measures to direct attention to their issues. They have shaved their heads and half their moustaches and kept mice and snakes in their mouths, conducted mock funerals, flogged themselves and even carried skulls of other farmers who had committed suicide due to debt pressure.