Mr Shah, in remarks aimed at the Hindu migrants’ votebank in the district, touched on the BJP’s key electoral promise 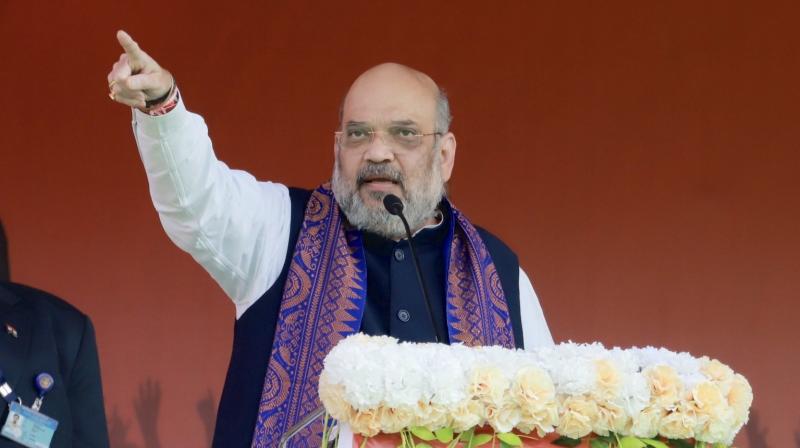 We will implement the Citizenship Amendment Act and give citizenship to the refugees after coming to power here, Shah said. — Twitter

Kolkata: Going all out against West Bengal chief minister Mamata Banerjee’s MP nephew Abhishek Banerjee with large-scale corruption charges, Union home minister Amit Shah on Tuesday accused “Bhatija & Company” of amassing Central funds to the tune of Rs 10,000 crores, which were disbursed by Prime Minister Narendra Modi for relief and rehabilitation to the state after it was devastated by Cyclone Amphan last year.

Mr Shah made it clear that the entity would be sent to jail by a special investigation team (SIT), mentioned in the BJP’s manifesto, following a probe once the saffron party forms its first government in the state if it wins the Assembly election. In a blistering attack on the Trinamul boss, he ridiculed her for running “115 scams” in comparison to “115 schemes” run by Mr Modi, while mocking her for failing to fulfil even 82 of her 282 promises made in the previous 2016 election.

The Union home minister told a BJP rally at Gosaba in South 24 Parganas: “Modiji has been sending a lot of funds here. Cyclone Amphan hit the state. Modiji released Rs 10,000 crores. Did you get anything out of it? Where did it go? Bhatija & Company amassed it. You do not need to worry. The new BJP government will form a SIT and put all those who looted each and every pie of the funds sent by Modiji behind bars. All scams, be it on Cyclone Amphan or Bulbul or Aila, will be probed by us through the SIT.”

Mr Shah, in remarks aimed at the Hindu migrants’ votebank in the district, touched on the BJP’s key electoral promise. “We will implement the Citizenship Amendment Act and give citizenship to the refugees after coming to power here,” he said.

Mr Shah added: “For the poor, the PM has undertaken 115 yojanas, or schemes. But Didi started 115 scams. The money of the poor is looted by those who take cut money. The BJP government will bring an end to it.”

Training his guns on Ms Banerjee over her false promises, Mr Shah drew attention to the sops for the Sundarbans delta in the BJP manifesto.

He claimed: “Didi announced 282 promises but could not meet even 82 of them. In 2016 she talked of building a multiple integrated fisheries zone. Till date, no one knows where it is. She should furnish an account but will not. You will give your account on April 1 by pressing the button on kamal (Lotus). We had also sent Rs 5,000 crores for the development of the Sundarbans. But the fund was misappropriated. In 2015, 2017 and 2019, Didi claimed she would turn Sundarbans into a district. Did it happen? Cast your vote for a BJP CM. We will make the Sundarbans a district within a year.”