Noting that his govt’s loan waiver was a temporary answer to problems of farmers, Singh said Centre had to help if solution had to be found. 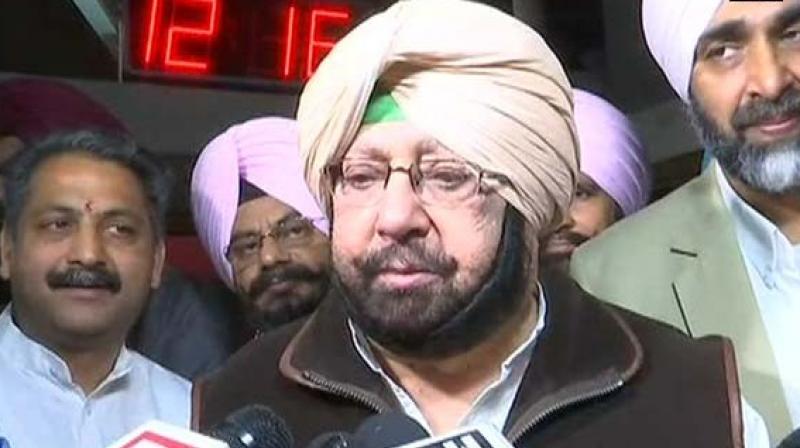 Lashing out at NDAgovt, he accused it of ‘failing’ to rescue farmers and said that farmer suicides would continue in Punjab and other states if the Centre did not become sympathetic to the community. (Photo: ANI)

Anandpur Sahib (Punjab): Punjab Chief Minister Amarinder Singh on Thursday acknowledged that his government's debt waiver scheme was not enough to assuage the sufferings of debt-ridden farmers and hit out at the Centre for “failing” to extend any help for beleaguered growers.

Noting that his government's loan waiver scheme was only a temporary solution to the problems of the distressed farmers, Singh said the Centre had to step in if a permanent solution to their plight had to be found.

He said his government would also soon come out with a loan waiver scheme for landless labourers, who were also reeling under a huge debt burden.

The chief minister was addressing a gathering after launching the third phase of the state government's farm debt waiver scheme, an official statement said. “The loan waiver scheme is not enough to alleviate all sufferings of the state's farmers,” Singh said, adding loan amounts of many farmers were more than what his government was currently waiving.

Lashing out at the NDA government, he accused it of “failing” to come to the rescue of farmers and said that farmer suicides would continue in Punjab and other states if the Centre did not become sympathetic to the community.

The chief minister said the states could not do everything on their own, without the central government's help. Pointing out that his government had inherited a debt of Rs 2.08 lakh crore, Singh said the loan waiver scheme was the best he could have done in such circumstances, especially considering the “lack of support” from the Centre and non-implementation of the Swaminathan Commission report.

Even the prime minister and the finance minister, whom he had personally met to seek help for farmers several times, had “failed” to realise the urgency of the situation and had implemented only a small part of the Swaminathan report, Singh claimed.