With the Opposition unrelenting and the new variant of Covid-19 slowly picking up pace, the government decided to end the Winter Session 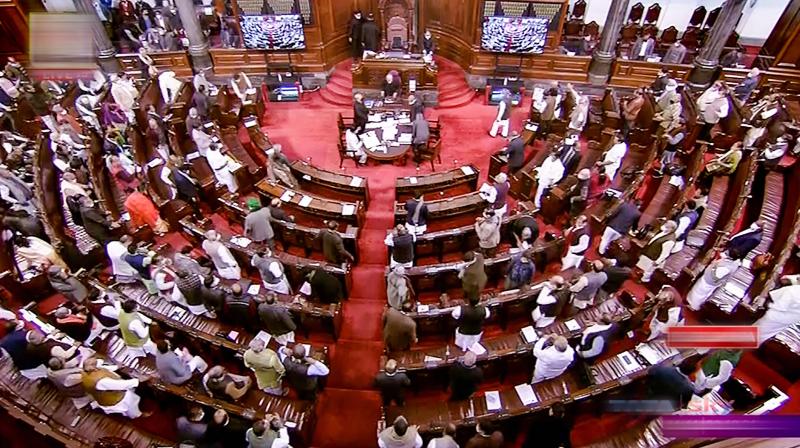 Parliamentarians in the Rajya Sabha during the Winter Session of Parliament, in New Delhi, Wednesday, Dec. 22, 2021. Rajya Sabha was adjourned for the session ahead of schedule today. (RSTV/PTI Photo)

New Delhi: With the Opposition unrelenting and the new variant of Covid-19 slowly picking up pace, the government decided to end the Winter Session of Parliament a day before schedule. The Opposition in both the Lok Sabha and the Rajya Sabha had been constantly protesting over the suspension of 12 Rajya Sabha MPs and seeking the revocation of these suspensions, and also demanding the sacking of minister of state for home Ajay Mishra “Teni” over his son's alleged involvement in the Lakhimpur Kheri killings.

On Wednesday, a discussion on the price rise and on climate change had been listed on the Lok Sabha’s schedule. However, Lok Sabha Speaker Om Birla announced the sine die adjournment in the morning itself. This was a day after Amroha MP Kunwar Danish Ali tested positive for Covid-19. He was regular in Parliament all through the session. In the Rajya Sabha, Chairman M. Venkaiah Naidu also announced that the Upper House was being adjourned sine die.

“Despite being fully vaccinated, today I tested positive for #COVID19. Yesterday, I attended Parliament also. I request all those who came in my contact to get tested and isolate themselves. I am having mild symptoms and hope to recover soon,” the BSP MP tweeted on Tuesday.

Giving details of the work transacted in the seventh session of the 17th Lok Sabha, Speaker Birla said total of 82 per cent work took place in the current session while 18 hours and 48 minutes were lost in the session due to adjournments.

Parliamentary affairs minister Pralhad Joshi said the government decided to end the Winter Session as the government’s essential business had been completed.

The bills passed include the Appropriation Bill on the supplementary demands for grants for 2021-22 which was passed by the Lok Sabha, and transmitted to the Rajya Sabha, and will be deemed to have been passed by both Houses after the end of 14 days under Article 109(5), he said.