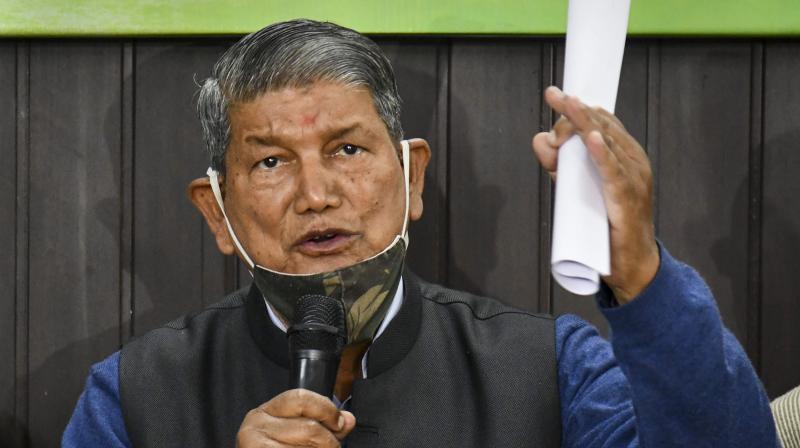 New Delhi: The Congress Party is facing a major jolt in poll-bound Uttarakhand as former chief minister and campaign committee chief Harish Rawat hit out at his own party, alleging “internal sabotage” on Wednesday. In a three-part tweet, he said: “Isn't it strange? We have to swim in this sea of elections, but instead of supporting me, the organisation has either turned its back on me or is playing a negative role.”

He added: “The powers-that-be have let loose many crocodiles (predators) in the sea we have to navigate. Those whom I am supposed to follow… their people have tied my hands and feet. I have been thinking... Harish Rawat, it’s gone too far, you have done enough, it is time to rest.”

He then made it clear he will decide on his future in the new year. “Then there is a voice in the head that quietly says I am neither weak nor will run from challenges. I am in turmoil. Hope the New Year shows me the way. I am confident that Lord Kedarnath (Shiva) will show me the way.”

Just a couple of months back Mr Rawat was navigating a difficult path for the Congress in Punjab between state unit chief Navjot Singh Sidhu and then chief minister Capt. Amarinder Singh. Mr Rawat had been coordinating between the high command and party leaders in the state. He was seen as close to the high command as he was fighting for them against Capt. Amarinder Singh. The situation went completely out of hand with Capt. Singh launching a scathing attack against Mr Rawat.

After Mr Rawat’s outburst, Capt. Singh took a dig at Mr Rawat, and he tweeted: “What you sow you shall reap … best of luck for your future endeavours, if there are any.”

Mr Rawat is one of the tallest and oldest leaders of the Congress in the state. AICC in-charge Devendra Yadav is a “political newbie” and has only been an MLA in Delhi. The two camps have been starkly divided in the Uttarakhand Congress, with the Rawat camp on one side and the Devendra Yadav camp on the other side. The party’s rank and file in the state is confused as they feel the high command can play an Amarinder Singh on Mr Rawat. Meanwhile, the ticket shortlisting process in the state has already started. Insiders claim leaders close to Mr Rawat are being ignored, and new leaders are being zeroed in on, which has led to some heartburn.

In a span of less than a year, the Congress is being seen to sideline senior leaders. If the high command doesn’t step in soon, the party may be heading for a political disaster in the state.