Uddhav says 'let them try to break Shiv Sena MLAs, we will not keep quiet'

'From here onwards I don't think elections are even needed,' Uddhav said. 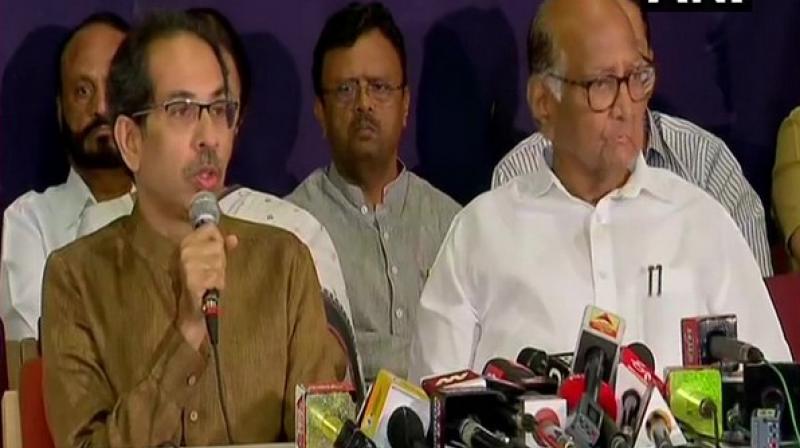 Shiv Sena and NCP addressed a joint press conference after Devendra Fadnavis took oath as Chief Minister of Maharashtra for the second term earlier in the day. (Photo: ANI)

Mumbai: Shiv Sena chief Uddhav Thackeray on Saturday said the situation was getting hysterical ever since Devendra Fadnavis took oath as Chief Minister of Maharashtra earlier on Saturday.

"Earlier EVM 'khel' was going on and now this is new khel. From here onwards I don't think elections are even needed. Everyone knows what Chhatrapati Shivaji Maharaj did when betrayed and attacked from behind," Thackeray told reporters.

"Let them try to break Shiv Sena MLAs, we will not keep quiet," he added.

Shiv Sena and NCP addressed a joint press conference after Devendra Fadnavis took oath as Chief Minister of Maharashtra for the second term earlier in the day.

NCP chief Sharad Pawar has clarified that the decision of going with BJP to form the government in Maharashtra is of his nephew Ajit Pawar, who took as Deputy Chief Minister today.

"Ajit Pawar's decision to support the BJP to form the Maharashtra Government is his personal decision and not that of the Nationalist Congress Party (NCP). We place on record that we do not support or endorse this decision of his," Sharad Pawar tweeted.

The move came at a time when deliberations between Congress, NCP and Shiv Sena seemingly reached the final stage on Friday. Earlier, NCP supremo Sharad Pawar had claimed that there was a consensus on Sena chief Uddhav Thackeray as chief minister of the alliance government.