Earlier in the day, Devendra Fadnavis took oath as Chief Minister of Maharashtra for the second term. 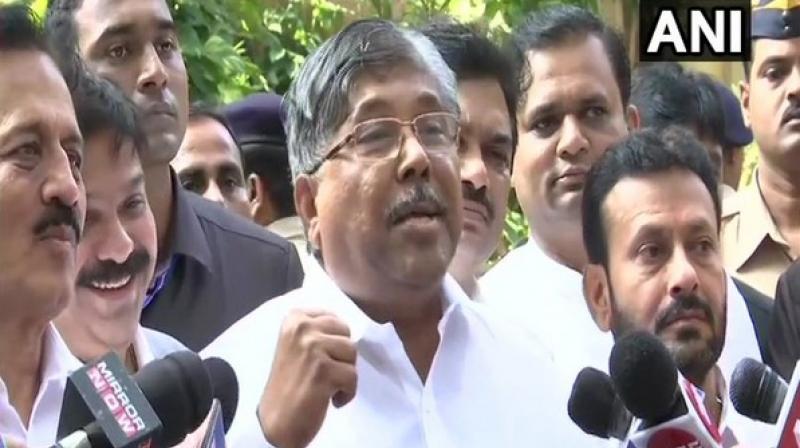 'Shiv Sena was continuously attacking BJP and engaging in discussions with Cong-NCP that is why we were compelled to form the government," he said. (Photo: ANI)

Mumbai: BJP Maharashtra unit chief Chandrakant Patil on Saturday said that his party was compelled to form the government in the state since its ally Shiv Sena betrayed the mandate.

"On October 24 results came, voters voted for BJP-Sena alliance. 144 was the majority mark, the alliance got 161 MLAs. Shiv Sena raised the issue of chief minister's post for 2.5 years and denied to support BJP. Shiv Sena betrayed the mandate and didn't even talk with us. Since the first press conference they had started talking about alternatives," Patil told reporters here.

"There was pressure from the people that BJP should form the government since the mandate was in our favour. Shiv Sena is ready to leave Hindutva. They are also ready to leave the issue of giving Bharat Ratna to Savarkar. Then why we remain silent? That is why Fadnavis took oath as the Chief Minister. We will give a stable government," he said.

"Sanjay Raut should now at least keep silent. He has ruined Shiv Sena. He should not talk about betrayals. Shiv Sena was continuously attacking BJP and engaging in discussions with Cong-NCP that is why we were compelled to form the government," he said.

Earlier in the day, Devendra Fadnavis took oath as Chief Minister of Maharashtra for the second term.

BJP, with 105 seats joined hands with the Nationalist Congress Party which bagged 54 seats to garner the majority figure.

However, NCP chief Sharad Pawar said that it was the decision of Ajit Pawar to join hands with BJP.

"Ajit Pawar's decision to support the BJP to form the Maharashtra Government is his personal decision and not that of the Nationalist Congress Party (NCP). We place on record that we do not support or endorse this decision of his," he tweeted.

The move came at a time when deliberations between Congress, NCP and Shiv Sena seemingly reached the final stage on Friday. Earlier, NCP supremo Sharad Pawar had claimed that there was a consensus on Sena chief Uddhav Thackeray as chief minister of the alliance government.