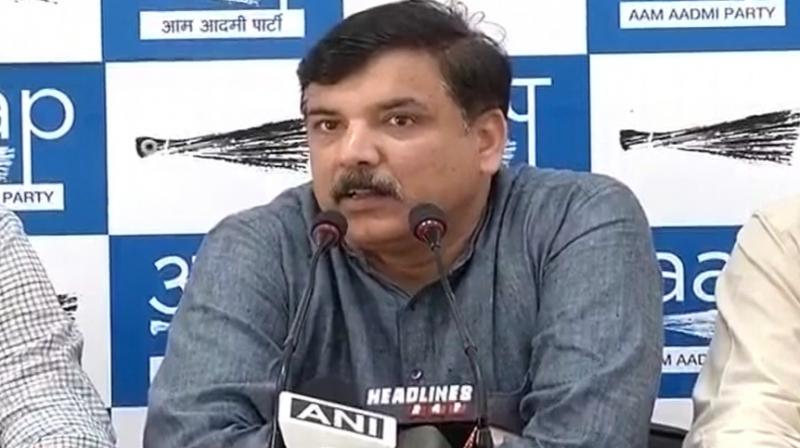 Singh asked how the government was formed in Maharashtra despite the two parties not having the numbers. (Photo: File)

New Delhi: The Aam Aadmi Party on Saturday termed the government formation in Maharashtra "undemocratic" and said it has "disrespected" the mandate of the state's people.

The month-long political impasse in Maharashtra ended dramatically earlier in the day with the Bharatiya Janata Party's (BJP) Devendra Fadnavis taking oath as the chief minister. Ajit Pawar of the Nationalist Congress Party (NCP) was sworn-in as the deputy chief minister.

Ajit is the nephew of NCP president Sharad Pawar.

"The way the government was formed in Maharashtra is undemocratic and it disrespected the mandate of the people of the state," senior Aam Aadmi Party (AAP) leader Sanjay Singh said.

"The dark act that took place in Maharashtra in the dark of night is the act of killing the dignity of democracy of this country," he said.

Singh said the role of the governor has been reduced to that of a "gatekeeper who is saluting those in power".

"Raj Bhavan has turned into Raja Bhavan," he said.

Maharashtra Governor Bhagat Singh Koshyari administered oath to Fadnavis and Ajit Pawar at the Raj Bhavan after President's rule was revoked in the state at 5.47 am.

Singh asked how the government was formed in Maharashtra despite the two parties not having the numbers.

"Even if the BJP's 105 MLAs and 22 MLAs (from the NCP) come together, the number still stands at 127, which is below the majority mark. The move (to form the government) is an attempt to sabotage political parties," he said.

According to reports, Ajit Pawar has the backing of 22 Nationalist Congress Party (NCP) MLAs.

In the 288-member Maharashtra Assembly, 144 is the majority mark.

Delhi Deputy Chief Minister Manish Sisodia took to Twitter to take a dig at the developments in Maharashtra.

Results of the Maharashtra Assembly polls were declared on October 24 and President's rule was imposed in the state on November 12 as no party or combine had the numbers to form the government.

The state plunged into a political crisis after the Shiv Sena broke its three-decade-long ties with the BJP following the latter's refusal to share the chief minister's post.

After days of talks, Sharad Pawar had said on Friday that a consensus had been reached between the three parties that Sena chief Uddhav Thackeray would lead the new government in Maharashtra.