On Saturday morning, Ajit Pawar was sworn in as Dy CM and partyless by evening after being sacked as legislature party leader. 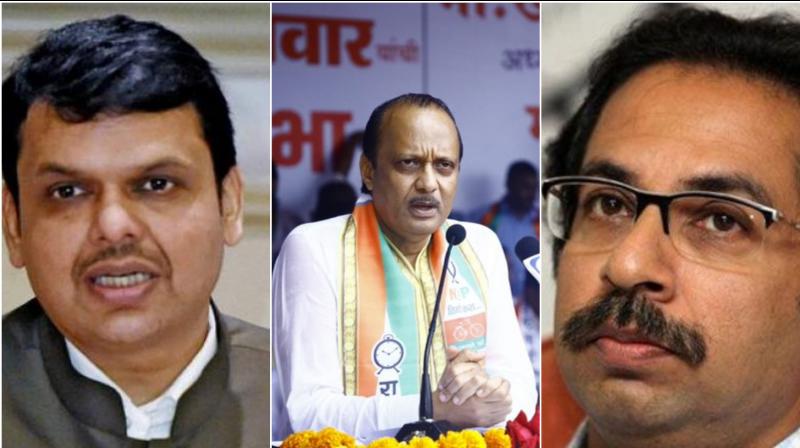 Mumbai: The Nationalist Congress Party (NCP) removed Ajit Pawar as its legislature party leader on Saturday after he extended support to BJP to form the government in Maharashtra.

The President's Rule was revoked at 5:47 am on Saturday, according to an official statement.

Read | President's Rule revoked in Maharashtra at 5:47 am

Nationalist Congress Party (NCP) chief Sharad Pawar was equally miffed with his nephew Ajit's decision to join hands with the Bharatiya Janata Party (BJP). "It was Ajit Pawar's decision to support the BJP to form the Maharashtra government. It was his personal decision and not that of the Nationalist Congress Party (NCP).  We place on record that we do not support or endorse this decision of his," the NCP chief said.

Here is the timeline:

"Our people are there. Registry is open now. They will decide on the urgency of the case. Petition on behalf of three parties have been filed , SC Registry is processing it for further action,” senior advocate Devadutt Kamat for the three parties said. https://t.co/pdiMB9RDTN

According to PTI, govt invoked Rule 12 of its transaction of business to bypass need of Union Cabinet's nod for revocation Prez rule in Maharashtra.

04:40 pm: Maharashtra Deputy CM Ajit Pawar is holding a meeting with NCP MP Sunil Tatkare and NCP MLAs Dilip Walse Patil and Hasan Mushrif at his brother Sriniwas Pawar's residence; Security has been heightened outside the residence of Sriniwas Pawar.

04:10 pm: Addressing a press conference, Congress spokesperson Randeep Surjewala said the Governor of Maharashtra has turned into Home Minister Amit Shah's hitman. He further said Prime Minister Narendra Modi and Amit Shah are behind the early morning coup. "Opportunist Ajit Pawar was threatened by the BJP and this is how they robbed a state," Surjewala said.

03:15 pm: Union Minister Ravi Shankar Prasad addressed the media and said that throughout the election campaign, Devendra Fadnavis' name was projected as the Maharashtra Chief Minister.

“Support base of BJP and the prospect of Devendra Fadnavis becoming CM, played a crucial role in success of Shiv Sena candidates,” he added.

Attacking the opposition parties, Prasad said earlier Congress and NCP leaders said the mandate with them was to sit in opposition then how did they think of forming a government. “When Shiv Sena broke a 30 year old alliance and took side with the opposition, isn't that the murder of democracy?,”  he asked.

Mumbai is the financial capital of India and Maharashtra is a big state. It was a conspiracy (by NCP-Shiv Sena-Congress) to control Mumbai through the backdoor, he said.

Prasad said that the Maharashtra Governor has taken the call and they would prove their majority on the floor.

02:45 pm: Union Minister and BJP leader Nitin Gadkari said, “I had earlier said anything can happen in cricket and politics, now you can understand what I meant.”

01:45 pm: In a press conference, Congress’s Ahmed Patel said today was a black spot in the history of Maharashtra. He said everything was done in a hushed manner and early morning. “Something is wrong somewhere. Nothing can be more shameful than this,” Patel added. 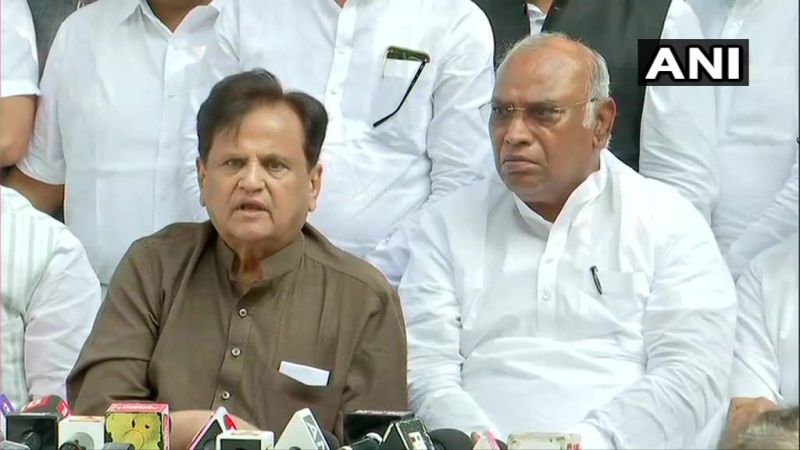 Patel also showed confidence in the Congress-NCP-Shiv Sena alliance. He said he was confident that they would defeat BJP in the trust vote. Patel asserted that they would fight this on both fronts, political and legal.

Attacking the BJP, Ahmed Patel said that they have crossed limits of shamelessness. He also said there was no delay on our part on government formation and denied charges calling it baseless.

01:35 pm: Post Shiv Sena-NCP joint press conference, Sena’s leader Sanjay Raut said, “Of the 8 MLAs who had gone with Ajit Pawar, 5 of them have come back. They were lied to, put in a car, and sort of kidnapped.” 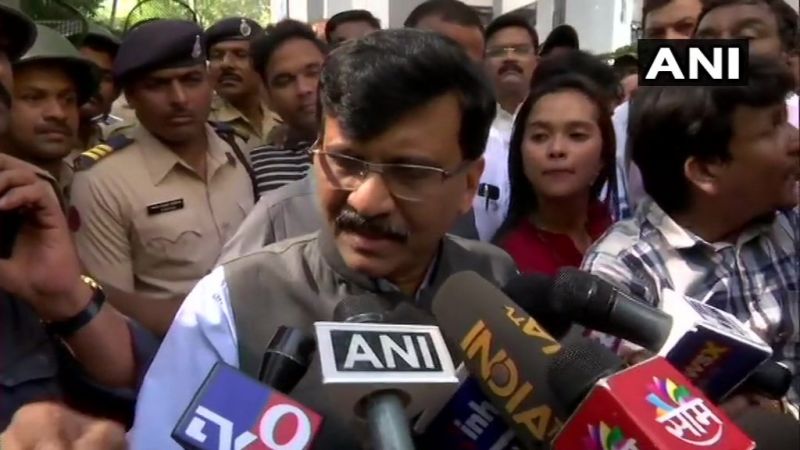 He said they are in touch with Dhananjay Munde and there is a possibility of even Ajit Pawar coming back. “Ajit has been blackmailed, it will be exposed who is behind this, in Saamna newspaper soon,” he added.

01:05 pm: Shiv Sena’s chief Uddhav Thackeray said, “Earlier, EVM game was going on and now this is new one. From here onwards, I don't think elections are even needed. Everyone knows what Chhatrapati Shivaji Maharaj did when betrayed and attacked from the back.” 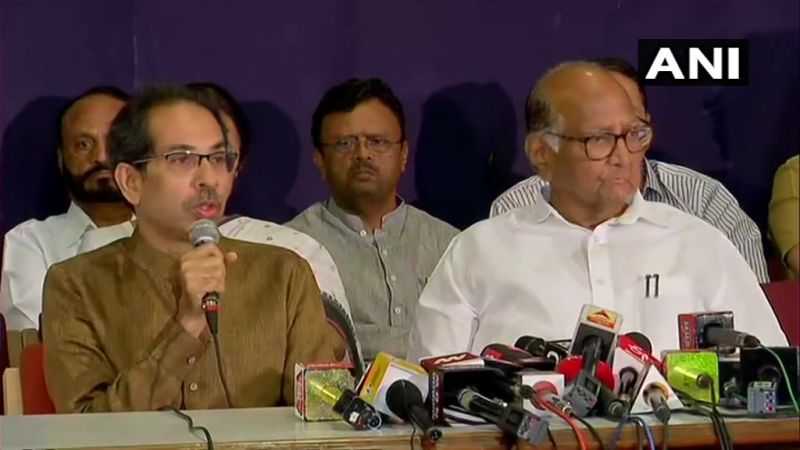 01:03 pm: Sharad Pawar said a new NCP legislative party leader would be elected at 4 pm today and action against Ajit Pawar would be taken as per the procedure.

01:00 pm: Speaking on proving majority, confident Sharad Pawar said that the BJP wouldn’t be able to prove it and after that three parties (Congress-NCP-Shiv Sena) will form the government as decided earlier. He also speculated that political parties have their MLAs list signed by them and a similar list of NCP was with Ajit Pawar, as he is CLP of NCP.

“I assume that he has submitted the same list. I am not sure about this but I suspect  that this may be the case.  We will discuss with Governor,” he added.

Pawar said as per his source, 10-11 MLAs were there in Raj Bhavan and out of those, 3 were already sitting with him.

12:55 pm: NCP MLA Rajendra Shingane said, “Ajit Pawar had called me to discuss something and from there I was taken with other MLAs to Raj Bhavan. Before we could understand oath ceremony was complete. I rushed to Sharad Pawar and told him I am with him and NCP.” 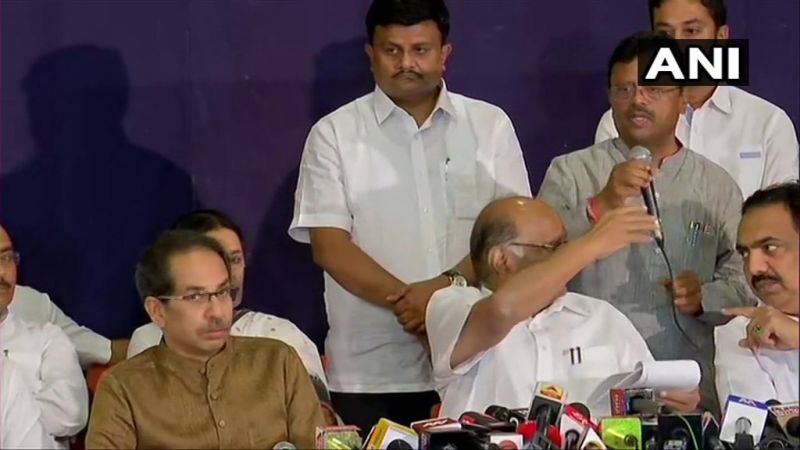 Two more NCP MLAs Sandip Kshirsagar and Sunil Bhusara also alleged that they were unknowingly taken to the oath ceremony and that now they have come back and expressed support to Sharad Pawar.

Two more NCP MLAs Sandip Kshirsagar and Sunil Bhusara also allege that they were unknowingly taken to the oath ceremony and that now they have come back and expressed support to Sharad Pawar. https://t.co/sLx19ngw2w pic.twitter.com/CechUAcQW4

12:45 pm: Addressing a joint press conference with Shiv Sena, NCP Chief Sharad Pawar said, “Congress, Shiv Sena and NCP leaders came together to form government. We had the numbers. We had our official numbers- 44, 56 and 54 MLAs with us who had supported the government. Several independent were also with us and we had numbers around 170.”

Reacting to Ajit Pawar’s decision, Sharad added:  “His decision is against the party line and is indiscipline. No NCP leader or worker is in favour of an NCP-BJP government.”

“All the MLAs who are going must know that there is an anti detection law and the possibility of them losing their assembly membership is high,” he added.

12:08 pm: Slogans raised in support of Sharad Pawar and against Ajit Pawar by a group of NCP workers outside YB Chavan Centre where Congress-NCP-Shiv Sena will address the media shortly. 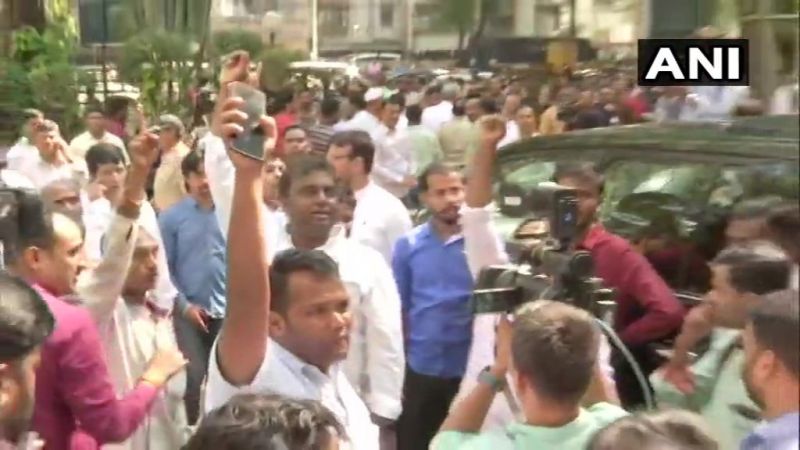 11:10 am: Nationalist Congress Party’s Nawab Malik said: “We had taken signatures from MLAs for attendance, it was misused as a basis for the oath.” 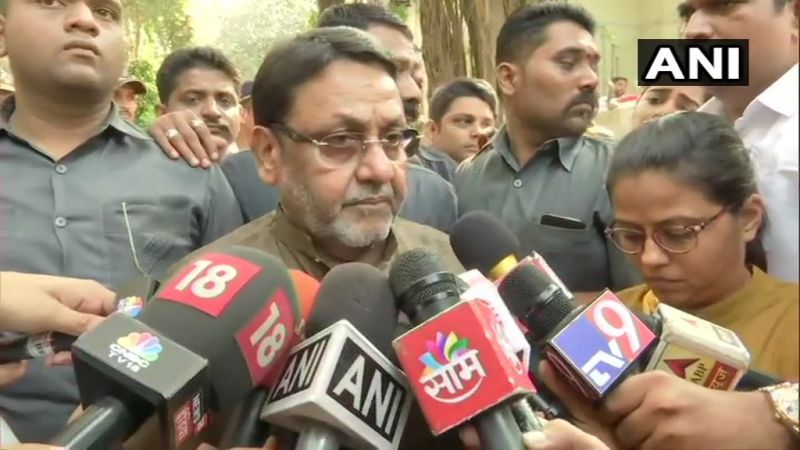 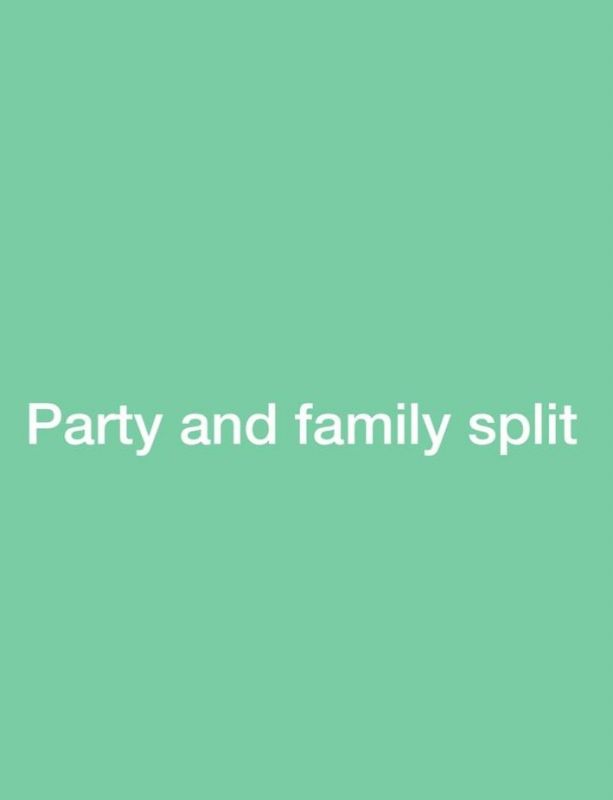 10:15 am: The Shiv Sena leader Sanjay Raut said the NCP's Ajit Pawar has backstabbed the people of Maharashtra by joining hands with the BJP, reacting to the dramatic developments in Maharashtra when Devendra Fadnavis took oath as Chief Minister and Ajit Pawar as his deputy. 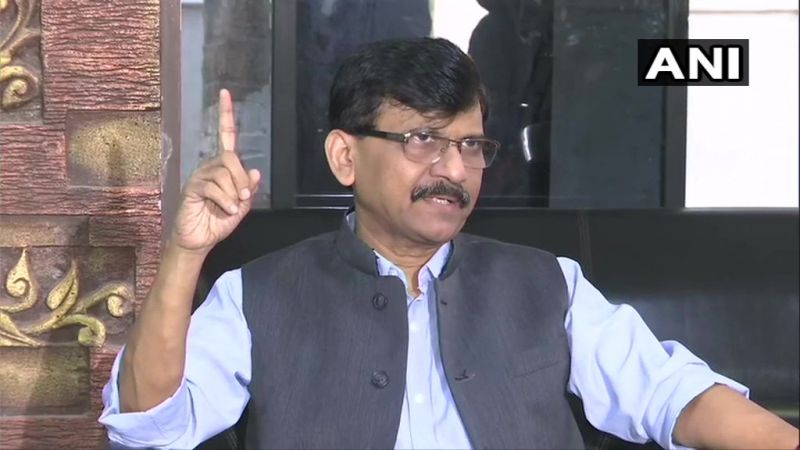 Addressing a press conference, Sanjay Raut said: “Shiv Sena and Sharad Pawar have got nothing to do with this. Sharad Pawar had no information. Ajit Pawar has backstabbed the people of Maharashtra. What Ajit Pawar has done will never be forgiven by Chhatrapati Shivaji and the people of Maharashtra. Ajit Pawar's place is inside Arthur Road Jail and now he will be deputy CM. What happens in dead of night is evil.”

09:30 am: Responding to the drastic twist in Maharashtra politics, the Nationalist Congress Party chief Sharad Pawar on Saturday said that it was Ajit Pawar's decision to support the BJP to form the Maharashtra government.

Taking to Twitter, Pawar added: “It was his personal decision and not that of the Nationalist Congress Party (NCP).  We place on record that we do not support or endorse this decision of his.” 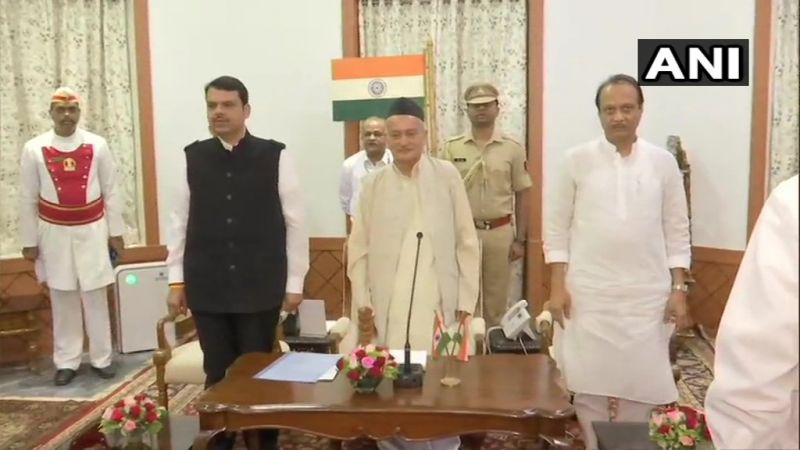 The move came at a time when deliberations between Congress, NCP and Shiv Sena seemingly reached the final stage on Friday.

Earlier, NCP supremo Sharad Pawar had claimed that there was a consensus on Sena chief Uddhav Thackeray as chief minister of the alliance government.

In an overnight turn, the BJP, which was silently witnessing the Shiv Sena-Congress-NCP's effort to seal a deal on government formation, clinched the power in the state.

The story of the historical turnover started on the intervening night of Friday and Saturday. Following the closed-door meet with NCP leader Ajit Pawar, Fadnavis urged the party to facilitate his swearing-in before anyone in the Sena-NCP-Congress comes to know and approach the Governor to stake claim.

Around 12:30 am, Governor BS Khoshiyari, who was scheduled to travel to New Delhi, cancelled his visit and at 2:30 am Secretary to Governor requested him to submit a revocation order at 5.47 am and arranged swearing-in at 6.30 am.

According to Tribune, Ajit Pawar and Fadnavis stayed at the same place till the swearing-in was completed.

At 5:47 am, President Ramnath Kovind lifted President's rule in the state and the official announcement came at 9 am. Both Ajit and Fadnavis reached Raj Bhavan at 5:30 am.