Ajit 'Dada', the man who took the limelight!

Ajit Pawar's move has resulted in an apparent rift in the Pawar family. 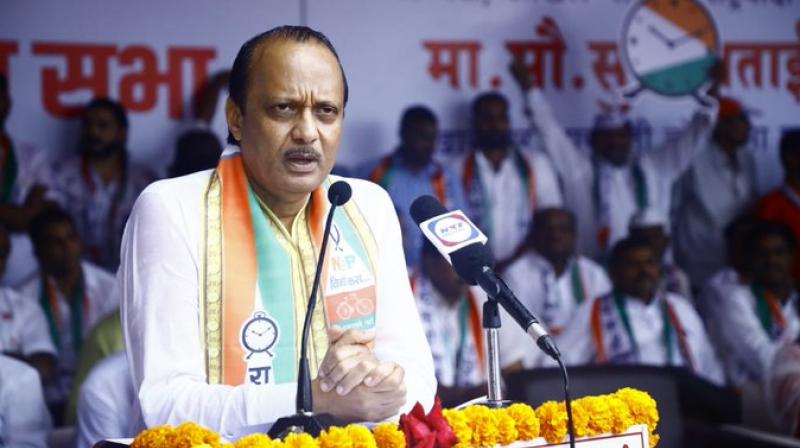 Ajit Anantrao Pawar, the nephew of NCP supremo Sharad Pawar, took oath at Raj Bhavan along with BJP's Devendra Fadnavis, who became the Chief Minister of the state for a second consecutive term. (Photo: Twitter)

Mumbai: Nationalist Congress Party (NCP) leader Ajit Pawar on Saturday took oath as the Maharashtra Deputy Chief Minister with BJP's support in a dramatic turn of events, despite his party extending its support to Shiv Sena and Congress for the government formation in the state which is witnessing a political turmoil since last month's assembly elections.

Ajit Anantrao Pawar, the nephew of NCP supremo Sharad Pawar, took oath at Raj Bhavan along with BJP's Devendra Fadnavis, who became the Chief Minister of the state for a second consecutive term.

Soon after taking the oath as Maharashtra Deputy Chief Minister, Ajit Pawar said that the NCP chose to go with the BJP for government formation in the state so that the problems faced by the farmers are resolved at the earliest.

However, Ajit Pawar's move has resulted in an apparent rift in the Pawar family, with Sharad Pawar and others denying support and promised to take action against the newly-sworn in Deputy Chief Minister.

Born on July 22, 1959, in Deolali Pravara in Ahmednagar district, Ajit Pawar is an MLA from Baramati constituency, a stronghold of the Pawar family. He has been representing this seat since 1991.

A political stalwart, with around three decades of experience, Ajit Pawar has previously served as the Deputy Chief Minister of the state between 2009 and 2014 when the Congress-NCP alliance was in power.

Affectionally called 'Dada' by his supporters, the junior Pawar was also a Lok Sabha MP from Baramati seat, which he later vacated for his uncle Sharad Pawar, who had won from this seat on a Congress ticket.

On the other hand, the political stature of Sharad Pawar continued to rise meteorically, going to become the Maharashtra Chief Minister and later a cabinet minister at the Centre.

When Congress-NCP coalition came into power in 1999, Ajit Pawar became a Cabinet Minister, firstly in the Irrigation Department (October 1999 to December 2003) in the government headed by Vilasrao Deshmukh. He was given additional charge of the Rural Development Department from December 2003 to October 2004 in Sushil Kumar Shinde's government.

The 60-year-old is an accused in Maharashtra irrigation scam. In September this year, the ED registered an Enforcement Case Information Report (ECIR) against Ajit Pawar, his uncle and others in connection with the Maharashtra State Co-operative Bank (MSCB) scam.

In an attempt at being comical about his inability to bring waters to the dams in the midst of acute water scarcity in the state, Ajit Pawar in 2013 made a shocking remark reportedly saying, "If there is no water in the dam...Should we urinate into it?" He later issued a public apology after facing flak from opposition leaders.

Ajit retained the Water Resources Ministry in Deshmukh's government when the coalition retained power in 2004. He also later continued heading the post in the government headed by Ashok Chavan.

He was also appointed guardian minister for Pune district in 2014 and held the post before the Congress-NCP coalition lost power to BJP-Shiv Sena alliance in the same year.