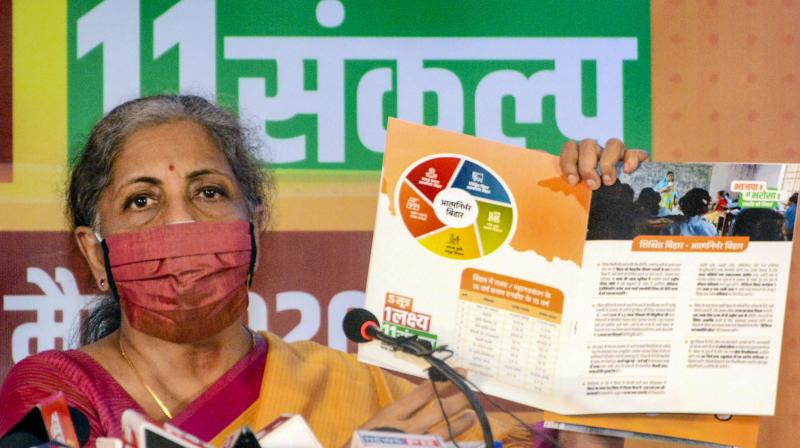 PATNA: The BJP on Thursday promised free coronavirus vaccine and 19 lakh jobs for youth in its manifesto for the Bihar Assembly elections. The manifesto titled “5 sutras, 1 Lakshya, 11 Sankalp” ( 5 sutras, one goal, 11 resolution) was unveiled by Union Finance Minister Nirmala Sitharaman in Patna.

"Bihar has set an example in its fight against COVID-19 pandemic. It is our resolve that as soon as the coronavirus vaccine will be available after the approval by ICMR, we will provide free vaccination for people of Bihar," the BJP manifesto released on Thursday said.

The announcement has triggered a political row in the state ahead of polls as the Opposition coalition feels that the BJP is politicising the COVID-19 pandemic for electoral gains. RJD leaders in Patna said that the vaccine is for the entire nation and it should not be used as a political tool for winning elections.

Political analysts feel that the 19 Lakh job announcements by the BJP could also be an attempt to divert public attention from RJD leader Tejashwi Yadav, who has been holding the NDA responsible for unemployment in the state and also recently announced around 10 Lakh government jobs for youth after winning the election.

While talking about the issue BJP state president Sanjay Jaiswal said, "Those who are making big announcements before the polls will start thinking about their families once they are in power."

The manifesto has been released a day before Prime Minister Narendra Modi is set to begin his election campaign in Bihar. He is scheduled to hold around 12 public meetings in the state ahead of polls.

On Friday, the Prime Minister is to address rallies in Sasaram, Gaya and Bhagalpur.

The BJP manifesto also talks about turning Bihar into an IT hub, providing higher technical education, including Engineering and Medical in Hindi, to ensure that a large section of students benefits from the national education policy, better and stronger industrial base and making around 1 crore women self-reliant in the next five years if the NDA is voted to power.

“People of Bihar are politically sensitive and well informed. They are well aware and understand the promises political parties make. If anyone raises questions about our party’s manifesto, we can answer them with confidence as we have fulfilled what we promised,” Union Finance Minister Nirmala Sitharaman said while releasing the manifesto on Thursday in the presence of other senior BJP leaders.

Assembly elections in the state are scheduled to begin from October 28 and the NDA comprising of JD(U), BJP and two partners HAM and VIP are in the fray against the Opposition coalition led by RJD.