The no-confidence motion moved against him by 55 Mahagathbandan MLAs was based on false charges, says Speaker Vijay Kumar Sinha 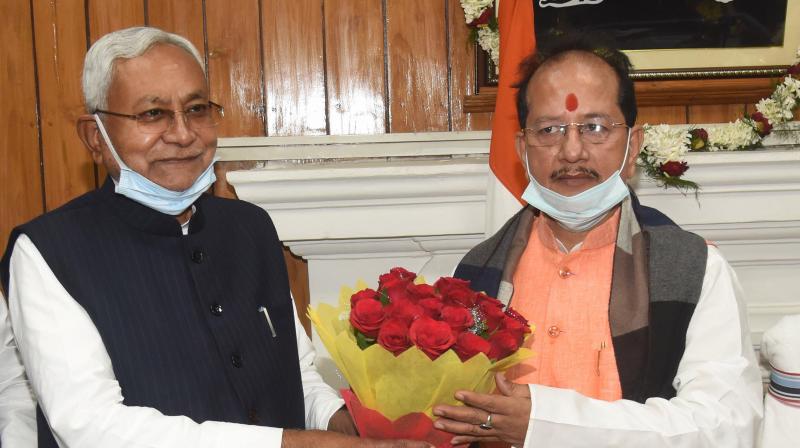 A file photo of Bihar Chief Minister Nitish Kumar presenting a bouquet to the State Assembly Speaker Vijay Kumar Sinha during the Winter Session of the Assembly, in Patna. (PTI Photo)

Patna: Bihar Assembly Speaker Vijay Kumar Sinha, a BJP legislator, has refused to resign from his post saying that the no-confidence motion moved against him by 55 Mahagathbandan MLAs was based on “false charges.”

His statement comes a day ahead of the special Assembly session called to elect a new Speaker and for Bihar Chief Minister Nitish Kumar to prove his government’s majority on the floor of the House. The grand alliance or Mahagathbandhan government has 164 MLAs in the 243-member House.

Normally the incumbent Speaker quits after the change of government. However, Sinha has remained in the position despite the JD(U) quitting the NDA on August 10 and forming a government with the RJD and the Congress.

“In the no-confidence motion, they have overlooked many rules (sansadiya niyam). Being bound to the rules I have refused to accept the notice sent to me. They have accused me of partisanship and having a dictator-like attitude in the House which is not correct. Resigning in such circumstances will hurt my self-respect. Therefore, I have decided not to quit,” Sinha told reporters.

“He should have resigned on moral grounds. It’s been fourteen days now since more than four dozen MLAs moved a no-confidence against him”, RJD spokesperson Shakti Yadav said.

A day after the formation of the new government in Bihar, around 55 MLAs had moved a no-confidence motion against the speaker.

The RJD says that “the special session is being convened for the new government to prove its majority on the floor of the house and to elect a new speaker”. The RJD insiders said that the party has also finalized the name of its leader Awadh Bihari Chaudhary for the speaker’s post.

Meanwhile, the BJP legislature parties of the two houses are also likely to finalize the names of its leader of the opposition in the state assembly and legislative council.

BJP leaders said that “in the present context the party will also discuss the strategy to be adopted in the state assembly”.

BJP leaders said that former deputy CM Tarkishore Prasad will continue as the BJP legislature party leader in the state assembly in case it doesn’t decide on a new leader.