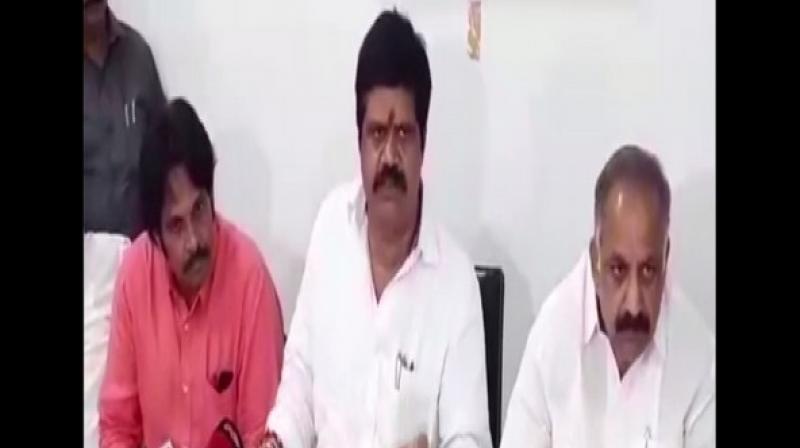 Andhra Pradesh Tourism Minister M Srinivasa Rao said that as many as 10 MLAs from the TDP are ready to join the ruling YSRCP if Chief Minister YS Jagan Mohan Reddy accepts them. (Photo: ANI)

Visakhapatnam: Andhra Pradesh Tourism Minister M Srinivasa Rao said that as many as 10 MLAs from the TDP are ready to join the ruling YSRCP if Chief Minister YS Jagan Mohan Reddy accepts them.

He further lashed out at former chief minister N Chandrababu Naidu for his allegation that the floods were "artificial" (man-made) and that the state government was conspiring to drown his house located on the banks of the Krishna River.

Following incessant rains in several parts of Andhra Pradesh, Deputy Tehsildar of Tadepalli village had earlier served a notice to Naidu to vacate his house.

On Andhra Pradesh minister Botsa Satyanarayana's recent comments on Amaravati, Srinivasa Rao said, "Botsa didn't say to change the capital city of Amaravati. He said expenditures are increasing in Amaravati when it is compared with other places. Capital city Amaravati is in the flood-prone area. That is why it is taking much more money to construct buildings there. People money is being wasted."

On this, Srinivasa Rao said, "Srujuna is always giving support to Chandrababu against YSRCP government. The government just came two months ago. It will take time to resolve all the problems. That is why Jagan stopped tenders of Polavaram and Amaravati. The government will filter corrupt persons."