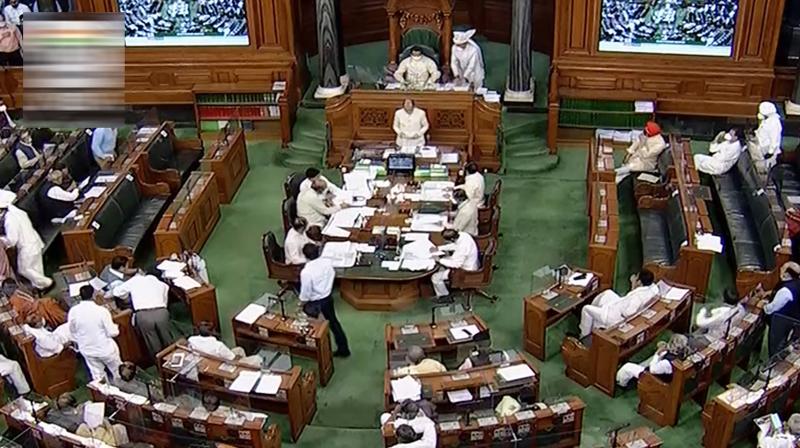 As soon as Mr Vaishnaw rose to speak, the Opposition MPs rushed to the Well of the House and raised slogans against the government. (PTI file photo)

New Delhi: Amid high drama in the Rajya Sabha, the Pegasus snooping issue rocked both Houses of Parliament on Thursday. In the Rajya Sabha, the Opposition protested over a range of issues, but things got particularly heated when Trinamul Congress MP Santanu Sen snatched the statement paper from electronics and information technology minister Ashwini Vaishnaw as he rose to speak on the snooping controversy.

Both Houses were adjourned till Friday after several adjournments in the course of the day. The Lok Sabha was adjourned repeatedly after the Opposition protested vociferously and refused to relent despite repeated requests from the Chair. The Upper House too saw several adjournments and could not transact any business as the Opposition cornered the government on a number of issues. These included the income-tax raids on some media groups, the alleged Pegasus spyware controversy and the handling of the Covid-19 pandemic by the government, among others.

High drama unfolded in the Rajya Sabha after lunch as the Opposition staged a protest over these issues. Things got particularly heated when Trinamul MP Santanu Sen snatched a statement paper from electronics and IT minister Ashwini Vaishnaw as he rose to speak on the Pegasus snooping controversy. Mr Sen tore the paper and threw it towards the deputy chairman, Mr Harivansh, who was in the Chair.

As soon as Mr Vaishnaw, who was due to make a statement on the phone tapping issue, rose to speak, the Opposition MPs rushed to the Well of the House and raised slogans against the government. Mr Harivansh urged the protesting MPs to desist from “unparliamentary behaviour” and go back to their seats and let the minister complete his statement.

As Mr Vaishnav began delivering his statement, TMC MP Santanu Sen went to his seat and snatched the paper from the minister and tore it apart, thus preventing him from speaking for a while. As papers were flung into the air, the minister could not complete his statement and instead laid another copy of it on the table of the House and the House had to be adjourned. But before that, a heated exchange took place between Union minister Hardeep Singh Puri and the Trinamool MP and marshals had to intervene to bring the situation under control.

“Members seem to be not interested in discussing the people’s issues,” Rajya Sabha Chairman M. Venkaiah Naidu said while adjourning the proceedings for the day in Rajya Sabha.

Mr Vaishnaw’s statement on the alleged snooping allegations was a repeat of what he said on Monday. He reiterated that “illegal surveillance is not possible” in India “with the checks and balances in our laws and our robust institutions”.

“In India, there is a well-established procedure through which lawful interception of electronic communication is carried out for the purpose of national security, particularly on the occurrence of any public emergency or in the interest of public safety, by agencies at the Centre and the states. The requests for these lawful interceptions of electronic communication are made as per relevant rules under the provisions of Section 5(2) of Indian Telegraph Act 1885 and Section 69 of the Information Technology Act 2000. Each case of interception or monitoring has to be approved by the competent authority… There is an established oversight mechanism in the form of a review committee headed by the Union Cabinet Secretary… The procedure, therefore, ensures that any interception or monitoring of any information is done as per the due process of law. The framework and institutions have withstood the test of time,” Mr Vaishnaw said in his statement, that was tabled. He added that the Israeli company whose technology had been allegedly used had denied these claims outright.