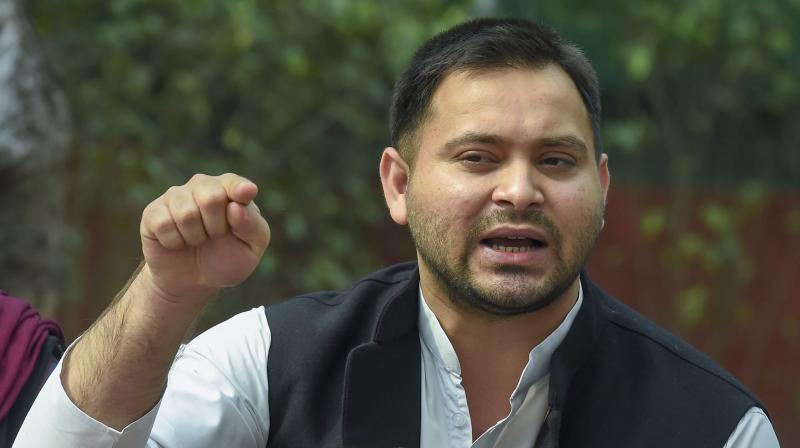 RJD leader Tejashwi Yadav is likely to visit other districts of the state to take stock of COVID -19 and flood situation. (PTI Photo)

Patna: Amid rising cases of COVID-19 and deteriorating flood condition in Bihar, the opposition RJD on Wednesday blamed the state government for its failure in dealing with the crisis.

During his visit to flood-affected Darbhanga and Madhubani districts, RJD leader Tejashwi Yadav said, “People are suffering due to the apathy of our state government. Our chief minister is invisible and there is no one to look after the people”.

RJD insiders said that Tejashwi Yadav is likely to visit other districts of the state to take stock of COVID -19 and flood situation.

As per an assessment more than three lakh people have been badly affected in around eight districts of north Bihar. Flood water has entered into several low–lying areas of East Champaran, Supaul, Darbhanga, Kishanganj, Muzaffarpur, Sitamarhi and Sheohar districts of the state.

Earlier this week Bihar CM Nitish Kumar had directed government officials to step up relief measures for people living in containment zones of the flood-affected areas.

Officials said that the state government has set up seven relief camps and around 27 community kitchens in areas where the situation is grim. Besides, administrative officials have also been asking people who have taken shelter in relief camps to follow the COVID-19 guidelines.

“Masks and gloves will be mandatory in relief camps especially in the containment zones”, officials said.

Reports suggest that the major cause of concern for the state government has been the rising cases of coronavirus. As per the figures issued by the state health department on Wednesday the total number of COVID-19 cases has gone up to 30066 in the state.

Patna with more than 4000 cases and 31 deaths has been the worst hit followed by Bhagalpur where more than 1800 cases have been reported and 17 persons have died due to the disease.

On Wednesday civil surgeon of Samastipur died at AIIMS Patna after being infected with the deadly virus. Earlier on Tuesday, BJP MLC Sunil Singh died of a sudden heart attack.

Mr. Singh was found positive a few days ago and was undergoing treatment at AIIMS Patna.

“The state government is playing with the lives of people. The government must immediately take concrete measures to deal with the crisis and increase the testing capacity in the state”, Tejashwi Yadav said.

He had earlier blamed Chief Minister Nitish Kumar for “not being able to handle the crisis properly” and alleged that the government was hiding actual figures and misleading people of Bihar.