Dr Mukherjee was the founder of Bhartiya Jana Sangh in 1951 which later evolved into the BJP. 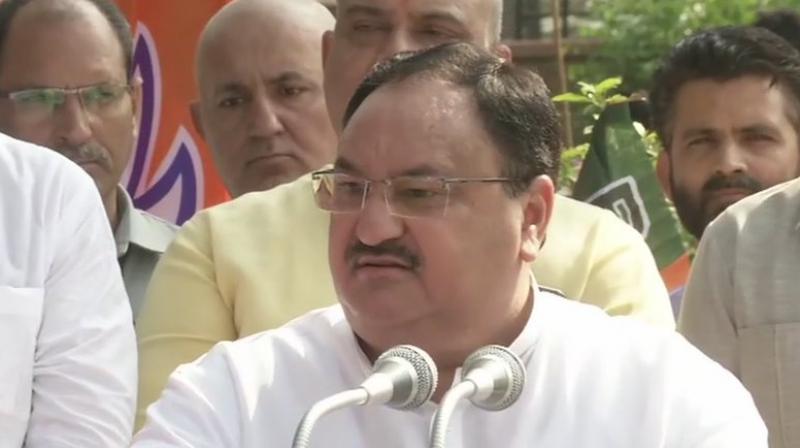 Nadda along with Home Minister Amit Shah and scores of party cadre paid tribute to Dr Shyama Prasad Mukherjee on his death anniversary at BJP Headquarters in the wee hours of Sunday. (Photo: ANI)

New Delhi: BJP Working president JP Nadda on Sunday hit out at the Congress party by raking up the issue of Dr Shyama Prasad Mukherjee's death saying that the former Prime Minister Jawahar Lal Nehru turned down the demand of an independent inquiry in the case.

"The whole country demanded an inquiry into Dr ShyamaPrasad Mukherjee's death, but Pandit Nehru did not order an inquiry. History is witness to this. Dr Mukherjee's sacrifice will never go in vain, BJP is committed to this cause," he said while speaking to media in New Delhi on the Syama Prasad Mookerjee's 66th Death Anniversary.

Nadda along with Home Minister Amit Shah and scores of party cadre paid tribute to Dr Shyama Prasad Mukherjee on his death anniversary at BJP Headquarters in the wee hours of Sunday.

Dr Mukherjee was the founder of Bhartiya Jana Sangh in 1951 which later evolved into the BJP. The political party he formed was ideologically close to RSS and was considered proponent of Hindu nationalism.

It is believed that the prominent leader died under mysterious circumstance while he was in custody in Srinagar for vociferously opposing Article 370 in Jammu and Kashmir.

It should be noted that Mukherjee and Praja Parishad leader Prem Nath Dogra had launched 'Ek Vidhan, Ek Pradhan, Ek Nishan' movement in early 1950s against the granting of the special status to Jammu and Kashmir. Mukherjee was arrested by the police while entering the state on May 11, 1953. He died during his detention in June 1953 at a prison in Srinagar.

However, many experts believe that there is no mystery behing Mukherjee's death saying that he died due to heart attack on June 23, 1953.