The BJP was set to return to power as it leads while Congress trailed far behind, according to trends released by EC. 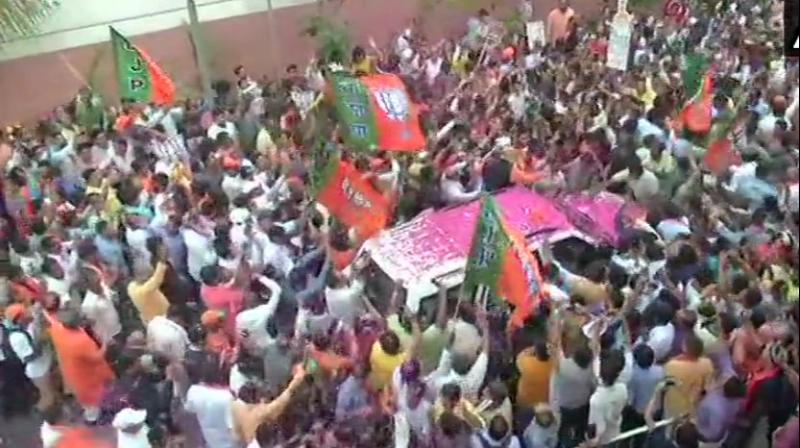 In a series of tweets, Singh said the people of India have once again given a decisive mandate to the BJP-led NDA and reposed their faith in Modi's leadership and vision of New India.

I thank the people of India for once again giving a decisive mandate to @BJP4India led NDA and reposing faith in Shri @narendramodi’s astute leadership and his vision of New India. Shri Modi is now all set to build a New India. 3/3

"Spoke to Prime Minister Shri @narendramodi and the BJP National President Shri @AmitShah over the phone and congratulated them for @BJP4India led NDA's stupendous victory in these Lok Sabha Elections," tweeted Rajnath.

Spoke to Prime Minister Shri @narendramodi and the BJP National President Shri @AmitShah over the phone and congratulated them for @BJP4India led NDA’s stupendous victory in these Lok Sabha Elections. 1/3

"This historic victory in the General Elections is the outcome of Modiji's visionary leadership, Amit Shahji's dynamism and the hard work of millions of BJP karyakartas on the ground," he said.

This historic victory in the General Elections is the outcome of Modiji’s visionary leadership, Amit Shahji’s dynamism and the hard work of millions of BJP karyakartas on the ground. 2/3

"The chief minister spoke to Prime Minister Modi and BJP national president Amit Shah and congratulated them for the huge and historic victory in the Lok Sabha polls," an official in the Chief Minister's Office said.

Veteran BJP leader L K Advani sent his wishes to Narendra Modi and Amit Shah. He said, “Heartiest congratulations to Narendrabhai Modi for steering BJP towards this unprecedented victory in elections. Amitbhai Shah as BJP President and all dedicated workers of the party have put in enormous effort in making sure that BJP's message reaches every voter.”

“It's such a wonderful feeling that in a country as large and diverse as India, electoral process has been so successfully completed and for that, my compliments to the electorate and all the agencies involved. May our great nation be blessed with a bright future ahead,” Advani added.

The ruling party's ally Shiv Sena MP Sanjay Raut said that people had given a befitting reply to opposition parties who created "an atmosphere of illusion" against Modi over issues such as the Rafale fighter jet deal.

"The entire country is `Modi-may' (in thrall of Modi)," Raut, who edits the Sena mouthpiece `Saamana', told reporters here. "The truth has to be accepted that no one could counter Modi. Today's mandate is such that no one can counter (Modi) for the next 25 years," Raut added.

The Rajya Sabha member observed that the BJP-led NDA is doing well also in Rajasthan, Madhya Pradesh and Chhattisgarh, where the Congress had won Assembly polls last year.

"The country has reposed faith in Narendra Modi's leadership for the next five years. He will take the country even further in five years," he added.

"Prime Minister Narendra Modi – Many Congratulations for securing such a big victory for the BJP. I am thankful to the people," Swaraj tweeted.

With its allies, the BJP-led National Democratic Alliance could win 343 seats in the 543-member Lok Sabha. In the last election, the NDA had 336 seats while BJP accounted for 282.