Prime Minister Modi further attacked Chief Minister Mamata-led government on the issues of corruption and crime in the state. 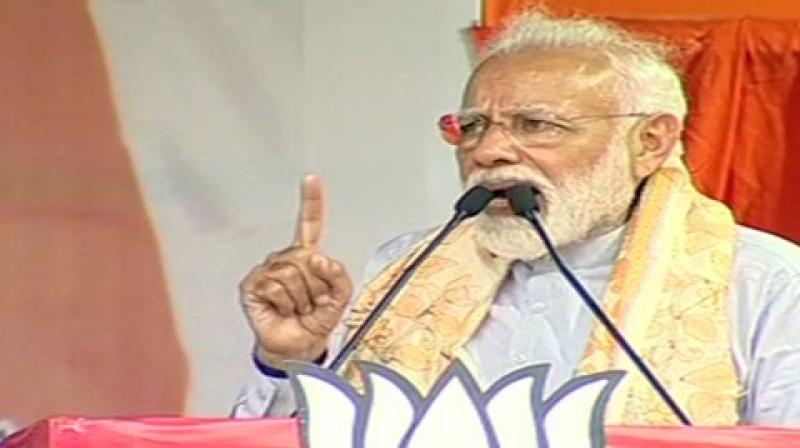 Prime Minister Narendra Modi in a rally at Asansol in West Bengal on Tuesday. (Photo: ANI)

Asansol: Hitting out at Chief Minister Mamata Banerjee, Prime Minister Narendra Modi on Tuesday said that the post of prime minister is not in the “auction which can be bought by the money of Saradha and Narada scams.”

“Didi (Mamata) is also dreaming to become the prime minister by contesting a handful of seats. If the prime minister’s post can be received from the auction, then Didi and the Congress would have come into the auction with the money looted by them,” Prime Minister Modi said, while addressing an election rally here.

“The post of the prime minister is not in the auction which can be bought by the money of Saradha and Narada,” said he.

The Saradha Group financial scandal was a major scam caused by the collapse of a Ponzi scheme run by the conglomerate. The multi-crore-rupee chit fund scam allegedly involves several key leaders from the Trinamool Congress.

Prime Minister Modi further attacked Chief Minister Mamata-led government on the issues of corruption and crime in the state.

“Today, the TMC government is giving a complete competition to the Congress so far as scandals are concerned. There are two such things -- corruption and crime, which are non-stop in the reign of the TMC,” he said.

“Saradha, Narada and Rose Valley are not just scams but a crime against the poor people ... You can understand the situation when a Chief Minister stands in support of those who loot the poor. They need proof of how many terrorists were killed but they are conspiring to remove the evidence of money looted from the poor,” he added.

Talking about the problem of infiltration, he said: “Didi allowed infiltrators to run her businesses. Now, she is calling campaigners from abroad. But your ‘Chowkidar’ wants to say that the politics of West Bengal will not bank on infiltrators from now.”

West Bengal, which has 42 seats at stake, is undergoing polling during all seven phases of Lok Sabha elections. Voting is taking place at five Lok Sabha seats on Tuesday. The counting of votes will take place on May 23.