GST will reflect 'one nation, one aspiration, one determination': Modi

Addressing the meeting of the Governing Council of NITI Aayog, the PM said GST shows the strength and resolve of the federal structure. 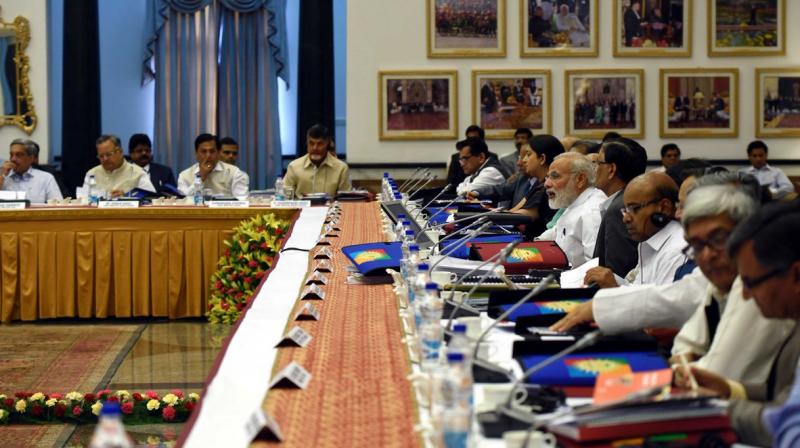 New Delhi: Prime Minister Narendra Modi on Sunday said the consensus on Goods and Services Tax (GST) will go down in history as a great illustration of cooperative federalism, adding the landmark legislation reflects spirit of "one nation, one aspiration, one determination".

Addressing the third meeting of the Governing Council of NITI Aayog in New Delhi, the Prime Minister said the GST shows the strength and resolve of the federal structure.

Thanking all the Chief Ministers for coming on one platform for this cause while keeping aside their ideological and political differences, Prime Minister Modi said the vision of "New India" can only be realised through the combined effort and cooperation of all states and Chief Ministers.

Prime Minister Modi said that "Team India" has once again assembled today to discuss and reflect on ways to prepare India for changing global trends.

He said the meeting on Sunday would be an opportunity to exchange views on policies and implementation.

"It is the collective responsibility of this gathering to envision the India of 2022 - the 75th anniversary of independence - and see how we can swiftly move forward to achieve these goals," Prime Minister Modi said.

Recalling the Father of the Nation Mahatma Gandhi on the occasion of the centenary of the Champaran Satyagraha, the Prime Minister said NITI Aayog has been taking steps to transform India with fresh vigour, adding the government, private sector and civil society need to work in sync.

He noted that NITI was a collaborative federal body whose strength was is in its ideas rather than in administrative or financial control.

He pointed out that the Chief Ministers did not have to come to NITI for approval of budgets or plans.

"NITI Aayog had gone beyond relying on government inputs and taken on board a number of outside specialists, subject experts and young professionals; and states can also contribute to policy formulation," he added.

Giving the example of e-NAM, where experiences of states played a key role in the final policy, Prime Minister Modi noted that sub-groups of state Chief Ministers had given vital inputs on subjects such as Centrally Sponsored Schemes, Swachh Bharat, Skill Development and Digital payments.

Stressing the importance given to the views of Chief Ministers, Prime Minister Modi noted that it was the first time that the former had been asked to recommend the list of Centrally sponsored schemes and the sharing pattern; despite funding constraints, the recommendations were accepted immediately.

The Prime Minister also mentioned that while there has been a 40 percent increase in overall fund allocation to states between 2014-15 and 2016-17, the percentage of funds tied to central schemes has declined from 40 percent of the earlier total to 25 percent of the enhanced total with a corresponding increase in the untied share.

The Prime Minister urged the states to speed up capital expenditure and infrastructure creation.

Speaking of the historic change in budget presentation date, the Prime Minister said this would enable timely availability of funds at the beginning of the financial year.

"Earlier, budgeted scheme funds were generally not approved by Parliament till May, after which they would be communicated to states and ministries. By that time, the monsoon arrived. Hence the best working season for schemes was typically lost," he added.

Mentioning the ending of the distinction between plan and non-plan expenditure based on the recommendation of the Rangarajan Committee in 2011, which had found the distinction to be counter-productive, Prime Minister Modi said, "Several important items of expenditure were included as 'non-plan' and hence neglected. Hereafter the emphasis would be on distinguishing between development and welfare expenditure on one hand, and administrative overheads on the other."

The Prime Minister called for carrying forward the debate and discussion on simultaneous elections.

Prime Minister Modi said the NITI Aayog is working on a 15-year long term vision, seven-year medium term strategy and three- year action agenda, adding this effort needs the support of states and will eventually reflect in benefits to them.