Voting will be held for 59 constituencies, also including Pilibhit, Sitapur, Hardoi, Unnao, Banda and Fatehpur 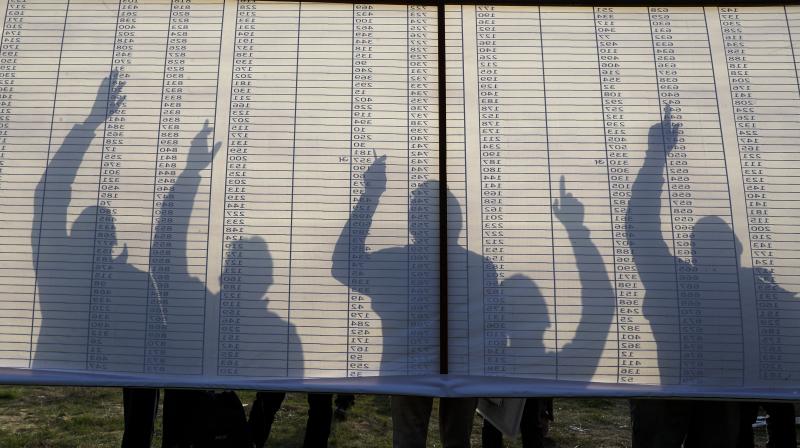 Election officials look up a duty chart that shows their allotted polling stations on the eve of the fourth phase of polling for Uttar Pradesh state elections in Lucknow, India, Tuesday, Feb. 22, 2022. (AP Photo)

New Delhi: Congress bastion Rae Bareli, BJP stronghold Lucknow and Lakhimpur Kheri, which was in the news after a Union minister’s son’s vehicle had rammed protesting farmers last year, leading to deaths, are among the nine districts that will go to polls on Wednesday, February 23, the fourth phase of the seven-phase Assembly election in Uttar Pradesh. Voting will be held for 59 constituencies, also including Pilibhit, Sitapur, Hardoi, Unnao, Banda and Fatehpur. This will cover parts of Bundelkhand, Rohilkhand, Awadh and the Terai region.

In the last Assembly polls in 2017, the BJP had won 51 out of 59 seats, SP had won four, three seats had gone to Mayawati’s Bahujan Samaj Party while BJP ally Apna Dal (Sonelal) had won one seat.

Among prominent candidates in this phase are UP law minister Brijesh Pathak, who is facing SP candidate and two-time corporator Surendra Singh Gandhi in the Lucknow Cantonment seat. Mr Pathak had won the Lucknow Central seat in 2017.

Another minister, Ashutosh Tandon, is in the fray from Lucknow East, and is being challenged by SP national spokesperson Anurag Bhadauria. UP Minister Swati Singh had won this seat last time.

The Sarojini Nagar Assembly seat will see a battle between former ED officer Rajeshwar Singh, fielded by the BJP, and Abhishek Mishra, who was a minister in the Samajwadi Party government.

UP Assembly deputy speaker Nitin Agarwal, who had crossed over to the BJP from the Samajwadi Party, will face an electoral test in this phase. The mother of the Unnao rape victim is standing on a Congress ticket.

In Lakimpur Kheri, the fight will be a multi-cornered one as not just the BJP, SP and Congress, candidates have been fielded by the LJP, BSP and the AIMIM as well.