Complaints have also been received from both ABVP and AISA and those will be clubbed with the FIR following an inquiry. 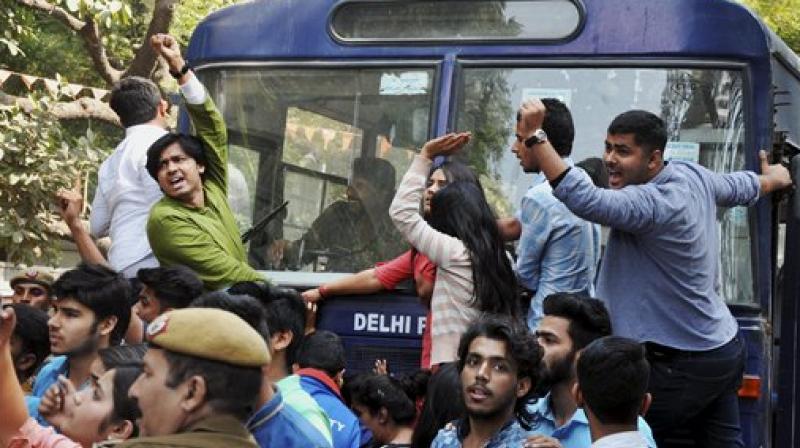 New Delhi: Delhi Police has registered a case of rioting and assaulting police officers on duty against unknown persons in connection with the clashes between RSS-backed ABVP and Left-affiliated AISA on Thursday at DU's Ramjas College.

The genesis of the clash was an invite to JNU students Umar Khalid, facing sedition charges, and Shehla Rashid to address a seminar on 'Culture of Protests' which was withdrawn by the college authorities on Wednesday following opposition by the ABVP. Rashid, a former JNU students union member, was instrumental in the movement against the students' arrest.

"Additional DCP-I Esha Pandey will conduct an inquiry into allegations of police high-handedness in the matter. An FIR for rioting and assault on public servant has been registered against unknown persons on a complaint by SHO (Maurice Nagar)," a senior police officer said.

Complaints have also been received from both ABVP and AISA and those will be clubbed with the FIR following an inquiry, the officer said.

Seven police personnel, including the SHO of Maurice Nagar police station, Arti Sharma, were injured in the incident. An assistant sub-inspector sustained a hairline fracture, he said.

RSS' student-wing Akhil Bhartiya Vidyarthi Parishad (ABVP) had on Wednesday locked down the Ramjas college seminar room and pelted stones protesting against an invitation to JNU students to address a seminar.

A section of teachers, students and members of left-affiliated All India Students' Association (AISA), who were agitated over the college's decision to "bow down" to "threat to freedom of speech" had decided to march to Maurice Nagar Police Station demanding action against ABVP members for alleged vandalism.

ABVP members, however, did not allow the march to proceed and allegedly locked the students and teachers inside Ramjas College while AISA members tried to barge inside the premises to "rescue the captives".

"The students have been locked inside and those trying to come out were beaten up by ABVP goons. We tried to enter the college to rescue the students but they are attacking us as well. They have come prepared with hockey sticks," an AISA member said.

College principal Rajender Prasad said he is in discussion with the teachers who were organisers of the event and requested both the groups to not disrupt peace and harmony in the college.

Prasad had yesterday claimed that though the college advocates freedom of speech, the decision was taken keeping the situation in mind.