BJP spokesperson said the ruling party should focus on fulfilling the vows made to people. 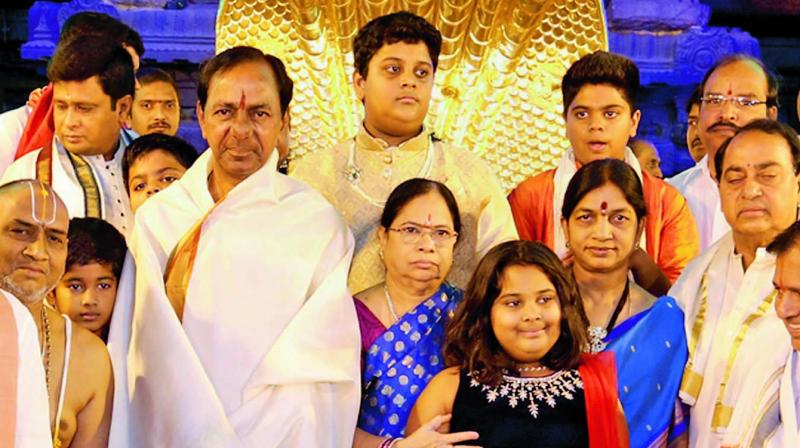 Hyderabad: The main Opposition Congress and the BJP in Telangana on Wednesday  criticised chief minister K. Chandrasekhar Rao for using public money to fulfil his “personal vows” made to Tirupati temple in Andhra Pradesh.

In a princely offering, the chief minister on Wednesday donated gold ornaments worth around Rs 5 crore to the famous hill shrine of Lord Venkateswara in Tirumala, to fulfil a vow he had made for realisation of separate Telangana.

“It’s not correct for KCR to use public money for his personal vows to god. Government should make public what transparency was maintained in the making of ornaments offered,” Congress leader M. Sasidhar Reddy told reporters here.

Telangana BJP spokesperson Krishna Saagar Rao alleged that Mr Rao “possibly is the only CM in the country who spends public money so brazenly for personal reasons.”

“BJP doesn’t have any objection to one’s religious beliefs and personal vows to god. However, these vows have to be fulfilled in individual capacity and not by using public money. Those in power should have basic competence to draw a line between personal and public spending,” Rao said in a statement.

Alleging that the TRS government has not fulfilled any of its election promises, the BJP spokesperson said the ruling party should focus on fulfilling the vows made to people.