Rahul has turned from 'pappu' to 'gappu', says Naqvi

This came a day after NC prez Farooq Abdullah said, ‘Rahul Gandhi is no longer a Pappu. He has proved his mettle.’ 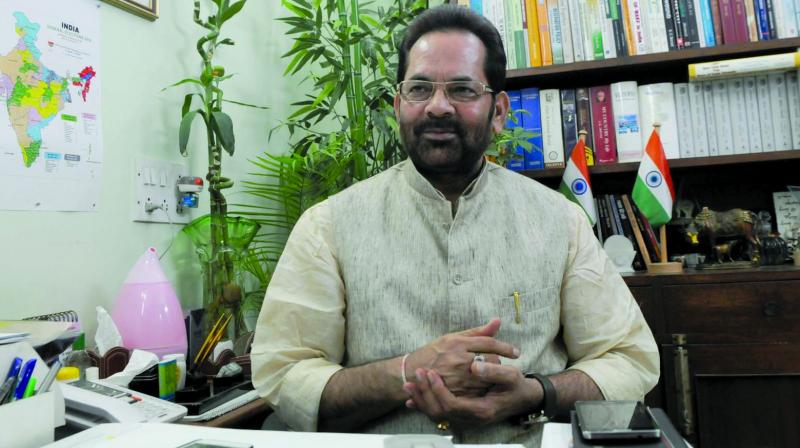 ‘In my view, he has now turned to 'gappu' by telling lies to the public. He is all about a bunch of lies,’ said Union Minister Mukhtar Abbas Naqvi. (Photo: File)

While the former Jammu and Kashmir chief minister remarked that the Congress President is no longer a 'pappu' (fool), Naqvi stated that the Gandhi scion has become 'gappu' (chatterbox) from 'pappu'.

"Abdullah has rightly stated that Rahul Gandhi is no more a 'pappu'. In my view, he has now turned to 'gappu' by telling lies to the public. He is all about a bunch of lies," the Minority Affairs Minister told ANI.

On Friday, Abdullah had stated that Gandhi is no longer a 'pappu' after proving his mettle as a leader by emerging victorious in the recently concluded assembly elections in three Hindi heartland states.

On December 11 and 12, the Congress party scored over the Bharatiya Janata Party in Chhattisgarh, Rajasthan and Madhya Pradesh.

However, in Madhya Pradesh, the winning margin was less for the Congress. The political quarter won 51.78 per cent of Assembly seats and the BJP only 44.64 per cent.