BJP said these charges were not new and had been debated and refuted for quite some time now. 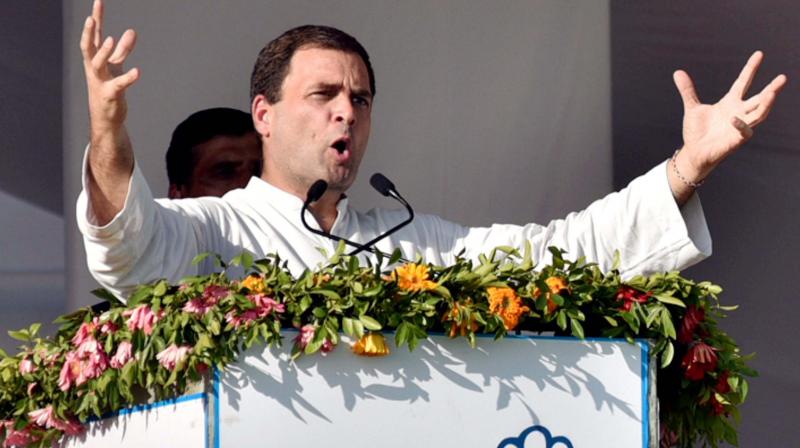 Mehsana/New Delhi: Bringing the battle to Prime Minister Narendra Modi’s doorstep, Congress vice-president Rahul Gandhi on Wednesday accused him of taking money from the Sahara and Birla groups when he was Gujarat’s chief minister, a charge the ruling BJP strongly refuted.

Mr Gandhi made the allegation while addressing a rally in Gujarat’s Mehsana after he claimed last week that there would be an earthquake if he was allowed to speak in Parliament as he had proof about Modi’s “personal corruption”. While Mr Gandhi demanded an independent probe into the matter, the BJP said these charges were not new and had been debated and refuted for quite some time now.

The Congress leader alleged that the income-tax (I-T) department had notings of Sahara officials’ claim that they had paid at least Rs 40 crores in nine installments to Mr Modi between October, 2013 and February, 2014. He further alleged that as per documents with the I-T department, the Birla group also paid Rs 12 crores to Mr Modi when he was Gujarat’s CM.

NGO Common Cause had filed a PIL in the Supreme Court, leveling the same charges against the PM, but a bench headed by CJI-designate Justice J.S. Khehar refused to take up the matter, saying there were only allegations, and no evidence. Union minister Ravi Shankar Prasad defended the PM and said, “Modiji is as pure as the Ganges.”

West Bangal CM Mamata Banerjee “congratulated” Mr Gandhi for “exposing” the PM “in public” and demanded a probe. AAP supremo and Delhi CM Arvind Kejriwal demanded Mr Modi must resign till he was cleared of all charges.

While there were speculations in the Congress and other outfits whether this was the “earthquake” Mr Gandhi was talking about, some of his party colleagues claimed that the “earthquake is yet to come”.

At the Mehsana rally, Mr Gandhi said, “You (Modi) did not allow me to speak in Parliament. I did not know why you did not want to face me in the House.”

Mr Gandhi then read out his charges against Mr Modi in the rally. “In six months there are nine entries in Sahara diaries, where it’s recorded that money was paid to Modiji,” he said.

“Same record is there with the Birla group of companies in which the total amount mentioned was `25 crores of which `12 crore had been paid,” Mr Gandhi read out. He also gave a “breakdown of the amounts” paid.

Mr Gandhi said that he was raising the issue on behalf of the country which needs answers to questions raised against the PM. “PM Modi takes bribes and then shamelessly foists demonetisation on Indians in the garb of fighting black money,” the Congress tweeted after the rally quoting Mr Gandhi.

The BJP continued its tirade against Mr Gandhi and called him as the “biggest patron of corruption” during the 10-year UPA rule. Ridiculing him, the BJP said, “Rahul is lost and defeated.”

Mr Prasad claimed that “nobody takes Rahul Gandhi seriously anymore”. The BJP also rejected the charge and described this as an attempt to divert attention from the AgustaWestland probe in which the names of Congress leaders and the “family” were coming up.

BJP spokesperson G.V.L. Narasimha Rao said Mr Gandhi was immature and was just indulging in bluff and bluster because people were not taking him seriously.