Shah did not seem to have missed meeting actor Rajinikanth, going by his remarks at a meeting with BJP functionaries 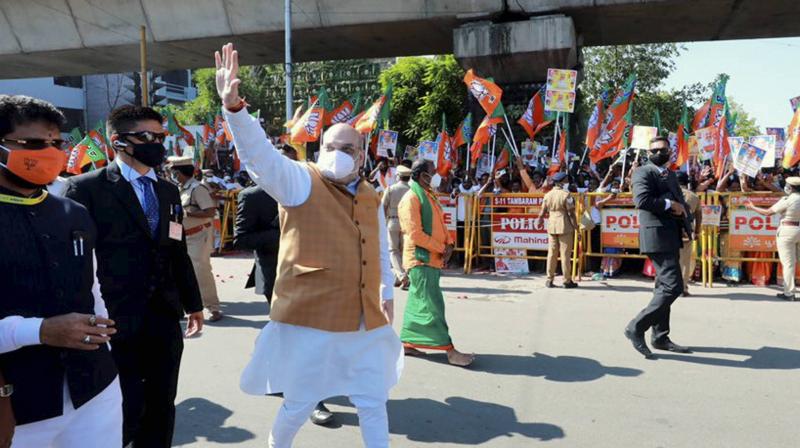 Chennai: After the long night of meetings and tete-a-tetes that Union home minister Amit Shah had with state BJP functionaries and others after his official meeting at Kalaivanar Arangam on Saturday, actor Rajinikanth's message was conveyed to Shah by the auditor and magazine editor S. Gurumuruthy. The same was the case with M.K. Alagiri, the DMK strongman in Madurai and son of the late former chief minister M. Karunanidhi, Alagiri is said to have sent a message through K.P. Ramalingam, an ousted DMK leader who joined the BJP earlier on Saturday

The Shah visit is being seen as a major success both by the BJP and the ruling AIADMK, which announced that its poll tie-up with the BJP would continue into 2021 when the state Assembly polls will be held.  The BJP had left no stone unturned to have Shah greeted warmly in the city by the ruling party.

According to sources, Gurumurthy was closeted with Shah for more than two hours. Rajinikanth is said to have told Gurumurthy what his plans were for the next Assembly elections when the two of them met very recently.

However, Shah did not seem to have missed meeting Rajinikanth, going by his remarks at a meeting with BJP functionaries. Shah had said that the party should not be dependent on celebrities and should be built on the strength of its ideological moorings.

Prior to addressing party members, Shah met leaders from the AIADMK, PMK and DMDK and reportedly settled the seat sharing question with them. The AIADMK leaders, O. Panneerselvam, Edappadi K Palaniswami and D. Jayakumar, had agreed to give 20 to 25 seats to the BJP, another 25 to the PMK and 15 to the DMDK, which would also be given a Rajya Sabha nomination.

Though none of this information was confirmed by any of the leaders involved in the talks, sources say that the AIADMK is keen on contesting close to 165 of the 234 seats in the Assembly as it wants to form a government on its own without support from allies. They had also promised to give more seats to the BJP in the Lok Sabha elections, citing it as ‘MGR formula’ that gave the Congress more MP seats and less MLA seats in the past.

Shah had stressed on the need to weaken the DMK for them to win the elections and told the cadre not to give up on their efforts in building the party. He cited examples of the BJP being extremely weak in some states and then rising to the level of capturing power. BJP had a future in Tamil Nadu, he had reportedly told the functionaries.

While leaving for Delhi on Sunday morning, Shah is said to have spoken to State Higher Education Minister K P Anbalagan on behalf of Anna University Vice Chancellor M K Surappa. He had told the Minister not to harass Surappa through enquiry commissions and so on.