Uddhav will be our CM, says Pawar after Cong-NCP-Sena meet 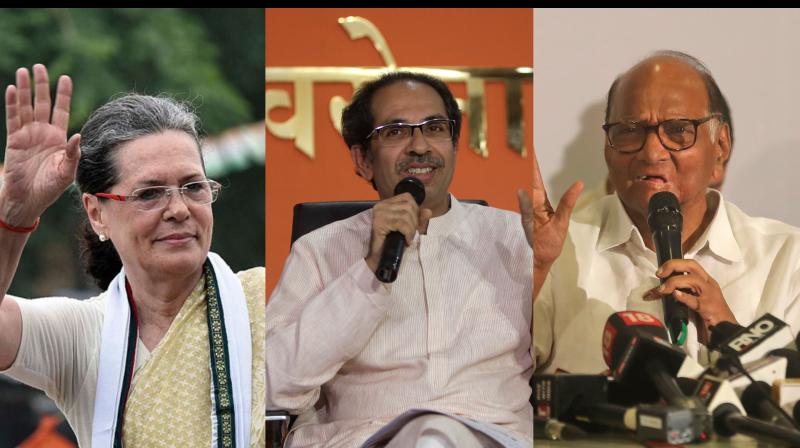 The talks of a pact escalated after Congress president Sonia Gandhi gave nod to stitch an alliance with the ideologically different Sena. (Photo: File)

Mumbai: The Shiv Sena, Congress and Nationalist Congress Party on Friday evening held a meeting to seal a deal on their alliance for forming a government in Maharashtra.

According to sources, NCP chief has urged Uddhav Thackeray to take the chief minister's post, NDTV reported. The Sena chief, however, said he would take a decision on the offer after consulting his MLA's.

Meanwhile, a voter from the western state's Dindoshi constituency has filed a petition in Supreme Court to restrain the post-poll alliance between the Sena, Congress and NCP to run the Maharashtra government.

The voter, SI Singh argued that these three parties entering into a post-poll alliance was against the mandate of people.

The talks of a pact escalated after Congress president Sonia Gandhi gave nod to stitch an alliance with the ideologically different Sena.

Earlier, Sena's chief spokesperson Sanjay Raut's name too emerged for the CM's post. denying the talks, he said: "This is incorrect. People of Maharashtra want Uddhav Thackeray as the Chief Minister."

Other than Raut, Sena leaders Eknath Shinde and Arvind Sawant's names too did rounds.

According to sources within the party, Thackeray was not keen on holding the post, hence other names were suggested.

"As party president, Thackeray would like to sit out and hold direct discussions with Sharad Pawar and Sonia Gandhi, instead of becoming the CM and then reporting to them," the source told News 18. He further added that Eknath Shinde has refused to take up the responsibility.

The pre-poll alliance -- Shiv Sena and BJP won a clear mandate to form the govt, but Sena fell out with all-weather ally BJP, as they failed to agree to a power-sharing deal to form a government in the state.

Last week, President's rule was imposed on the recommendation of the Governor BS Koshiyari after not a single party was able to prove numbers for government formation.