The constitution of the 21-member parliamentary consultative committee on defence was notified on October 31. 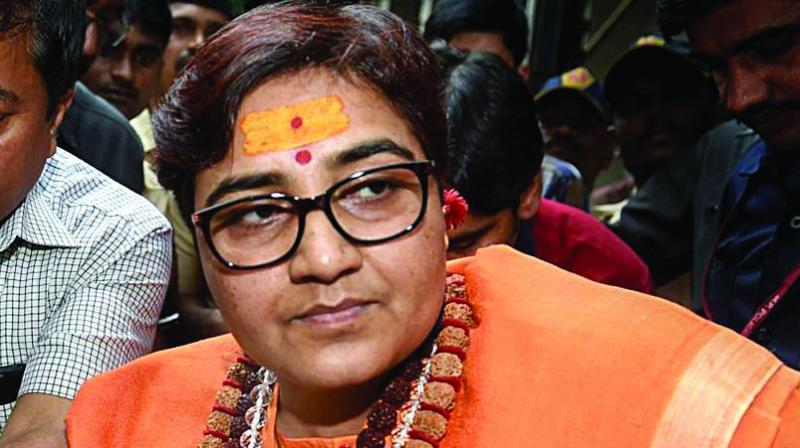 Bhopal: A huge row has broken out over the nomination of controversial BJP MP from Bhopal Pragya Singh Thakur, an accused in the 2008 Malegaon blast in which six people died and over 100 were injured after a bomb strapped to a motorcycle went off, to a parliamentary panel headed by defence minister Rajnath Singh.

The Congress on Thursday regretted her nomination to the 21-member parliamentary consultative committee on defence, calling it an “insult to defence forces, parliamentarians and every citizen of India”.

“It is unthinkable that a person who is facing charges under sections of the Unlawful Activities Prevention Act (UAPA), the Indian Penal Code (IPC), Arms Act and Explosive Substances Act could be nominated to a parliamentary panel. It is not good for democracy”, a Congres spokesman said here on Thursday.

“Pragya Thakur, a terror accused and Godse fanatic, has been nominated by the BJP govt to be a member of the Parliamentary Panel on Defence. This move is an insult to our nation’s defence forces, to our nation’s esteemed parliamentarians & to every Indian”, a tweet by the AICC said.

The constitution of the 21-member parliamentary consultative committee on defence was notified on October 31. Pragya Thakur, 49, who is currently on bail in the 2008 Malegaon blast case on the ground of ill-health, has landed in controversies every now and then ever since she was fielded by the BJP in Bhopal to contest against veteran Congress leader Digvijay Singh in the recently-held Lok Sabha elections.

She made uncharitable comments against Maharashtra anti-terrorist squad chief Hemant Karkare, martyred in the Mumbai 26/11 terror attack, inviting action by the Election Commission a couple of weeks before the 2019 Lok Sabha elections.

She won the Lok Sabha polls in Bhopal by defeating Congress candidate Digvijay Singh by a margin of over 3.60 lakh votes.

Pragya has recently sparked a controversy when she snubbed her constituents for complaining about the lack of hygiene and cleanliness in Sehore, a part of her constituency, by saying: “I am not elected to get drains and toilets cleaned”.

The BJP has, however, defended her nomination to the defence panel. “She is a member of Parliament and hence has every right to be member of a panel like other members of Parliament”, BJP spokesman Rajneesh Agrawal said here.