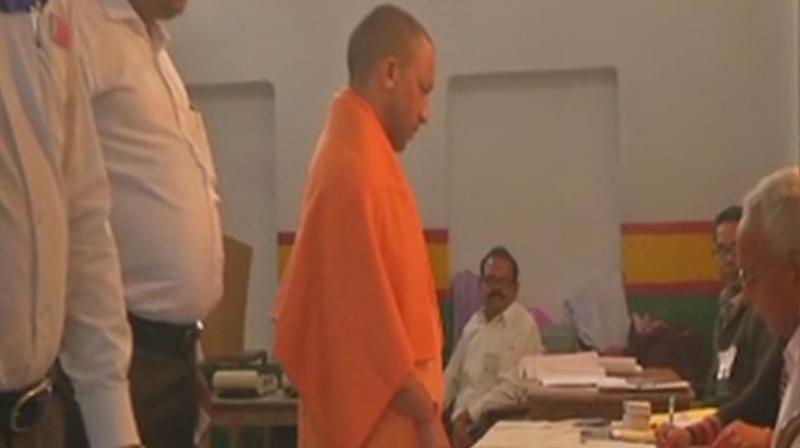 The chief minister cast his vote at the polling centre in Kanya Primary Pathshala in ward no. 68 in old Gorakhpur on Wednesday morning. (Photo: ANI/Twitter)

Gorakhpur (UP): Polling for the first phase of Uttar Pradesh civic elections is being held in 24 districts on Wednesday with Chief Minister Yogi Adityanath exercising his vote in Gorakhpur here.

He exuded confidence that the BJP will come out with flying colours all over the state.

The chief minister cast his vote at the polling centre in Kanya Primary Pathshala in ward no. 68 in old Gorakhpur on Wednesday morning.

Interacting with media later, the chief minister asked everyone to exercise their democratic right.

"The BJP will get massive victory in these elections ... the BJP candidates will win on all the seats," he said before leaving for Varanasi and Allahabad for campaigning for the remaining phases of the elections.

Meanwhile, Union Minister of State Shiv Pratap Shukla cast his vote at the St. Andrew's College polling booth and exhorted people to use their right to vote in a big way.

Speaking to newspersons, he said that his party wanted to give more rights to Mayors of the Nagar Nigams for which it will also bring an amendment in the existing law.

Polling for the 25 districts will be held on November 26 and for the 26 seats on November 29, while counting of votes for all the three phases would be done on December 1 and results will be declared on the same day.