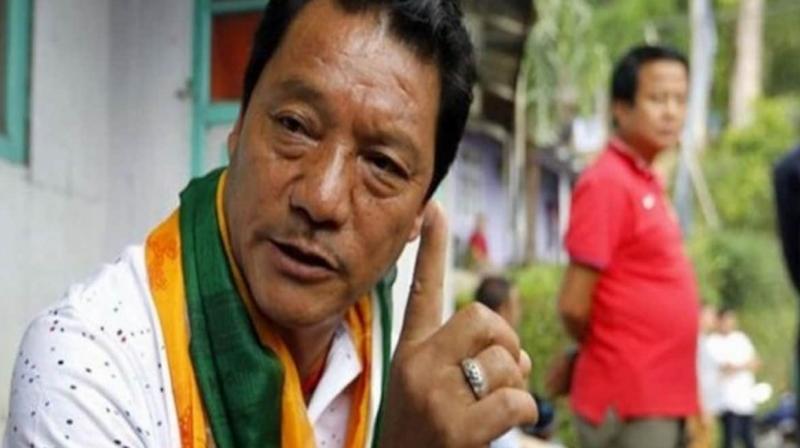 Kolkata: In a dramatic move, absconding Gorkha Janmukti Morcha (GJM) founder Bimal Gurung on Wednesday took a U-turn and dealt a heavy blow to the BJP ahead of the Assembly election in West Bengal next year. Accusing the saffron party of not fulfilling its “commitment” towards the separate statehood demand of “Gorkhaland”, he quit the NDA, leaving the BJP stumped.

With talk of an alliance with Trinamul Congress on his lips, Gurung also offered full support to chief minister Mamata Banerjee to help her return to power for the third consecutive time.

His announcement came after he surfaced in Kolkata in the afternoon for the first time in the past three years, when he was on the run with more than 150 cases, including under the Unlawful Activities Prevention Act, against him for spearheading a violent movement in Darjeeling for “Gorkhaland” in the middle of 2017.

Travelling by car, Gurung went to Gorkha Bhavan in Salt Lake first. However, he could not enter as the police personnel were guarding the building. Later, at a hotel, he alleged: “Though we were a constituent of the NDA 2009 onwards, the Central government led by the BJP did not fulfil its commitment of finding ‘Gorkhaland’ as a permanent political solution for the hills. It has not included 11 Gorkha communities in the list of Scheduled Tribes. We were cheated. So we are quitting the NDA.”

He added: “But Mamata Banerjee kept her promises. In next year’s election, we will ally with her party to give a fitting reply to the BJP. Our demand for Gorkhaland is still alive. Our aim and vision is to take our cause forward. In the 2024 Lok Sabha election, we will support the party which will take up our cause.”

Gurung revealed that he spent a long time in New Delhi after fleeing the hills in the wake of cases on the violence. He said that he came to Jharkhand only two months ago. But his calculated move came at a time when the BJP is raking up the Gorkhaland demand to corner the ruling Trinamul Congress in the Assembly polls.

It also coincides the Centre’s attempt to hold talks on Gorkhaland with the GJM and the Mamata Banerjee government. On October 19, BJP president J.P. Nadda had assured a meeting of different communities in North Bengal of fulfilling the demands for Gorkhaland and the inclusion of 11 Gorkha communities in the Scheduled Tribes’ list.

State BJP spokesman Sayantan Basu alleged that the TMC had exercised pressure tactics on Gurung to toe its line. “He must have been promised relief from the pending cases against him. Otherwise, how can an accused like him with UAPA cases appear in public and move freely in Kolkata? He was not arrested by the police. His exit from the NDA is a different matter. We have nothing to say on that because the GJM is a different political outfit.”