'The nation is backing him (Modi), it is very natural,' Union Minister for Youth Affairs and Sports Kiren Rijiju added. 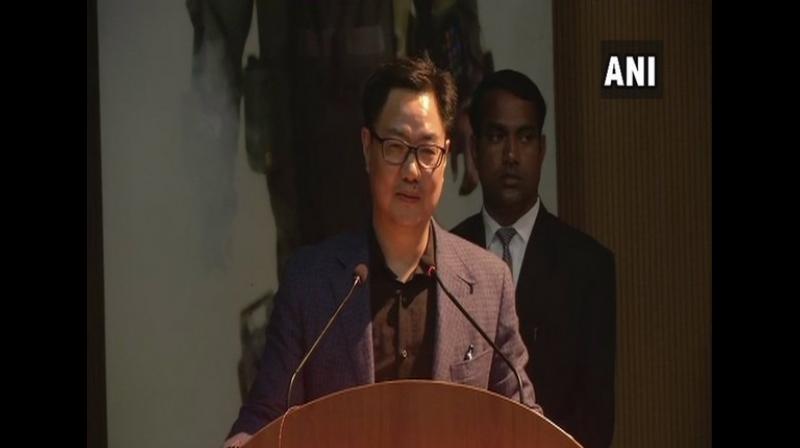 After the voting in two states Haryana and Maharashtra, Union Minister for Youth Affairs and Sports Kiren Rijiju expressed confidence of the BJP's victory. (Photo: File)

New Delhi: After the voting in two states Haryana and Maharashtra, Union Minister for Youth Affairs and Sports Kiren Rijiju expressed confidence of the BJP's victory.

"Well, exit polls are showing a clear victory for BJP which is very good, the country is moving in the right direction and under the leadership of PM Narendra Modi ji, India is marching ahead," Rijiju told reporters here on Tuesday.

"Nobody wants to stop the progress of India, why would somebody try to create obstacle in the growth of the country when India is today moving in direction and speed which we have never seen before. The nation is backing him (Modi), it is very natural," he added.

When asked about boxer Nikhat Zareen's letter, the minister said: "See, one should not make too much issue out of this. I don't know why people want to intervene and talk about this issue. I have already told BFI (Boxing Federation of India) to handle it appropriately. So, the federation have to take care of it in the interest of sports."

"So, they will handle it nicely by discussing. We are putting those champions into unnecessary scrutiny, they are champions, they are players and we should make them look like they are fighting," he added.

Zareen, on October 17, demanded a 'fair chance' to contest the qualifiers for the Tokyo Olympics. In her letter to sports ministry, she said the BFI's rule of exempting gold and silver medallists from the World Cup was being changed to accommodate pugilist Mary Kom, who won a bronze in the tournament.

Rijiju further stated: "They are claiming for their own position as per the rules and BFI will take care of it. Why should we unnecessarily create a debate on that? This not an issue for public debate, this is the federation call to take. Every organisation has rules and regulations minister should not be intervening in every issue."

Rijiju also said that for him, every sports body is equal to him.

"Whoever becomes head of the cricket, it is not my concern. My concern is that there must be some system of governance in every sports federation. Clean sports is my agenda, every federation and every player has to follow the rules of the land. Nobody is above the rule, land or country. There is nothing to talk about particular sports body for me every sports body is equal we have to treat equally," he said.